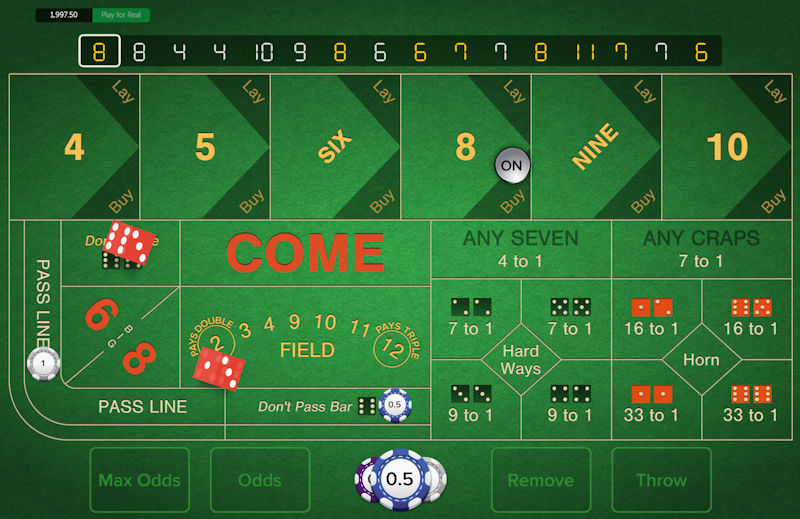 Craps is the dice casino game in the U.S and, like Roulette, is a game that just screams ‘casino’ when seen in movies, but it’s not such a popular pastime with European, UK and Asian players.

For that reason, and in tandem with the illegality of online casino gaming in any American state up until relatively recently, it’s currently not often found amongst the table games offered by many casino software developers. Gamesys is one of the exceptions, and for those who love the click of dice that’s a good omen for enjoying a decent online incarnation of this famous game.

Craps has a relatively complex layout to make work in an online format, particularly with the modern expectation of players likely to use a mobile device for play. Gamesys has therefore done a great job with its Craps game. It’s opted for a plan view of the table, rather than trying to recreate the point-of-view of the shooter, with a compressed layout that still manages to facilitate all the traditional betting options very neatly.

Audio has three elements to it – Music, Voice Over and Sound FX – and it is to our great relief that each can be muted individually, allowing us to kill the dreadful music, but keep the effects and Dealer voice that we felt added to the fun of playing. The user controls for betting are very intuitive to use, with a handy Horn Bet and Hard Ways button to quickly lay those bets with a single click if you want them. Getting into the game post initial betting, you’ll find the dice physics very realistic to create a nice thrill to each roll and give the game a feel of authenticity that we certainly appreciated.

We also think the Dealer voice deserves special mention for creating a convincing atmosphere during play – he actually sounds like he’s engaged in the game, which isn’t always the case with online casino game voice overs!

For the uninitiated Craps can seem a little complicated when compared to the rules of Roulette and Blackjack, but it can be a very rewarding table game to play if you take just a little time to get acquainted with it. Finding an online craps game to play these days isn’t so easy, but we applaud Gamesys for not only having one in its inventory but also making it such a treat to play. It can be a little slow to load (at least that’s what we experienced during review), however the wait is well worth it in our opinion when you get to the point (a little pun to finish with there, if you’re already a Craps fan!)