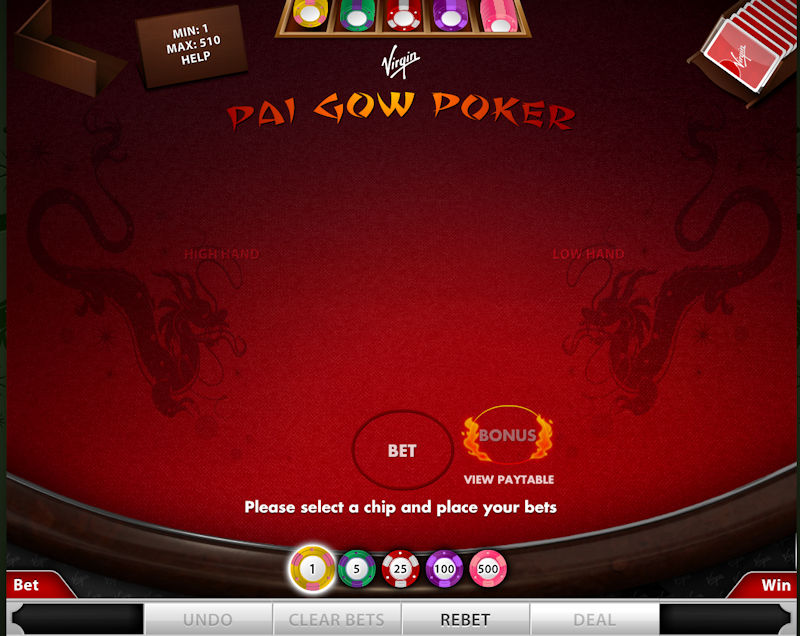 Gamesys is less well known that other casino software developers such as NetEnt and Playtech, but it’s been beavering away in the industry for many years now, notably behind the scenes of Virgin Games (as it was called originally) and now Virgin Casino as well as a number of other well-regarded online casino brands.

One of its more unusual products is its Pai Gow Poker table. This game is huge in Macau, but is gradually winning plenty of fans amongst European and UK players looking for another choice of table game where strategic play is prized.

The Gamesys Pai Gow Poker game takes place on a very attractive red baize layout, with moody lighting adding to the ‘serious’ feel. There’s thankfully no terrible background music ruining the mood here – a complaint we’ve routinely levelled at other online table games we’ve played – but an atmospheric crowd ambience from a real-world gaming floor. We found it quite acceptable, but there’s always a choice to mute it in the settings menu, although that also kills the sound effects that accompany events during play too, which isn’t so flexible for users who like those effects but not the ambience.

Moving to matters of gameplay, the user interface is clear, and also seems to work well on mobile devices, making staking simple to execute ahead of the deal and subsequent hand splitting. The animation of cards being dealt isn’t terribly smooth or lifelike in our opinion, and the flat perspective of the cards on the table doesn’t add to the illusion of playing a real table either, but these graphic details aren’t deal breakers.

We just personally rate table games that go that extra yard to recreate the look and feel of playing a real table now that consumer devices and typical connection speeds make this more practical to give effect to. Overall though, this Pai Gow Poker game should satisfy most keen players needs, and includes a Bonus Bet to tickle more action out of the player’s initial seven-card deal.

Pai Gow Poker is rarer to find in many online casinos focussing on European and UK players, but it is an intriguing game that should attract the attention of any player who enjoys the strategic challenges of games like Blackjack and more common poker formats.

Gamesys has done a good job with this online version and, whilst we would like to have seen more realism in its presentation, it does a very respectable job of delivering the essential gameplay in an instant play format that works equally well on desktop and mobile devices.