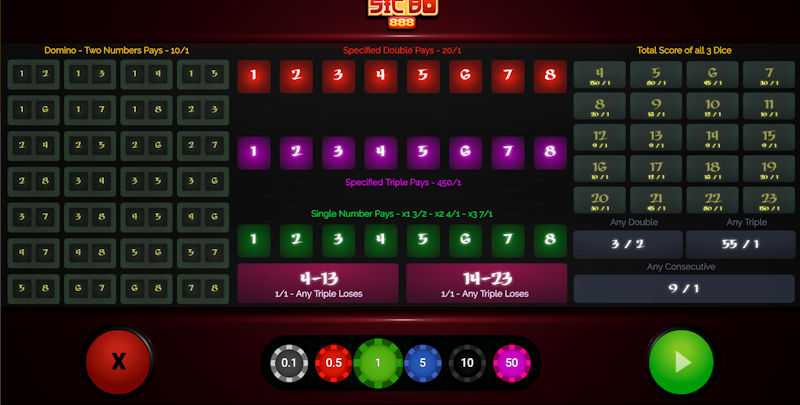 Sic Bo can reasonably be regarded as like the Roulette of casino dice games. Popular in the Far East’s real-world casinos, it’s all about multi-way betting on the outcome of three standard dice being rolled by the table’s Dealer / Croupier. It’s very easy to learn and play, however it’s fair to say that it’s not really set the online casino world alight (yet?) and as a result, despite often being part of many casino software developers inventory a few years back, finding examples of it today outside of Live Dealer tabs is a bit more unusual. One developer who still has some love for Sic Bo is the UK’s 1x2gaming, so let’s see how they roll with this traditional dice game.

Pure and simple could describe the presentation of 1x2gaming’s Sic Bo, and for the purposes of this review we’re covering the more modern HTML5 version of this game. There is a legacy Flash version of this Sic Bo (which is more visually elaborate), however since so many players now turn to mobile devices for their online casino entertainment the HTML5 version is the one you are most likely to experience.

Returning to the layout, 1x2gaming has gone for a plan view that makes good use of the screen real estate on smaller mobile devices plus well thought out user controls and prompts to assist you with laying your preferred bet predictions. There’s a degree of customisation possible from the settings menu, should you wish to change the virtual baize colour or mute sound effects, but the look and feel is quite minimalistic.

The dice roll is visually pleasing (and, again, designed with mobile use a priority) but it is accompanied by a rather glitchy dice roll sound effect we got a little irritated by. This isn’t an online table game that is going to win any prizes for accurately simulating the precise look and feel of playing a real gaming table in a real-world club, but if speed and the core thrills of Sic Bo are your priority this does the job very well indeed.

Sic Bo might be a minority sport amongst the majority of online casino players in today’s market, but we’re pleased that some developers are keeping the flame alive for those who do love this venerable Chinese dice game. 1x2gaming’s Sic Bo isn’t flashy in its presentation, but we found it really rather satisfying (other than the dice roll sound effect we noted above) the more we spent time with it.

If you spot it in the table game lobby of your favourite online casino, do give it a look – its Zen-like simplicity could make for a refreshing alternative to your usual choices.