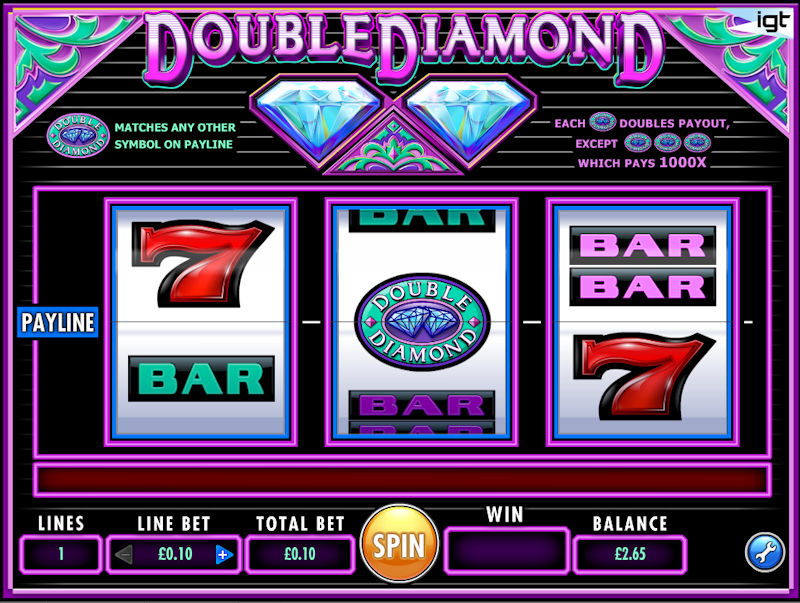 There are a handful of slots that have achieved near legendary status amongst players, successfully transitioning from the real-world gaming floors of casino resorts (where they first caught players’ attentions) to the global reach of the best online casinos. Amongst the ranks of these venerable video slots is IGT’s Double Diamond. So what makes this stalwart, which digitally debuted in 1989, still so sought after over three decades later? It’s time for a spin.

Double Diamonds’ origins from an earlier era of slot gaming are crystal clear from the first time you clap eyes on it. This is modelled on the original fun of electro-mechanical ‘stepper slots’, so offers the fabulous simplicity of just three reels with a single payline to focus on for symbolic wins.

The symbol set is classic stuff too, with just bars, cherries, lucky 7s and the eponymous Double Diamond logo etched onto those reels, and any three-of-a-kind landing on that payline guaranteeing a win. The only exception to that three-of-a-kind win rule is the cherry symbol that can bring a win with one or more instances landing.

Bonus features? Well, we return to the Double Diamond symbol for that facet. Not only is it the highest paying symbol – dropping a very eye-catching win of 1000 times your bet for a three-of-a-kind result – but also functions as a Wild that can substitute for all other symbols to assist a win.

Adding to that Wild behaviour, you’ll find that any win the Double Diamond brings with one instance taking effect will double the regular award, whilst two bringing their bonus magic will quadruple it.

In competition with the hundreds of new online slots that boast multiple bonus features, richly detailed animations and cinematic soundtracks Double Diamond could seem like a pretty dull, flawed gem. And yet, and yet . . . much like a diamond there’s a purity to this slot that many players have clearly found, and continue to find, deeply alluring, despite the temptation to be dazzled by more sophisticated games.

If you’re new to slot gaming, Double Diamond couldn’t be easier to play and enjoy. More seasoned players may well find its retro charms and simplicity a refreshing spin that reconnects them with the purest thrills of reel entertainment. What’s not to like?