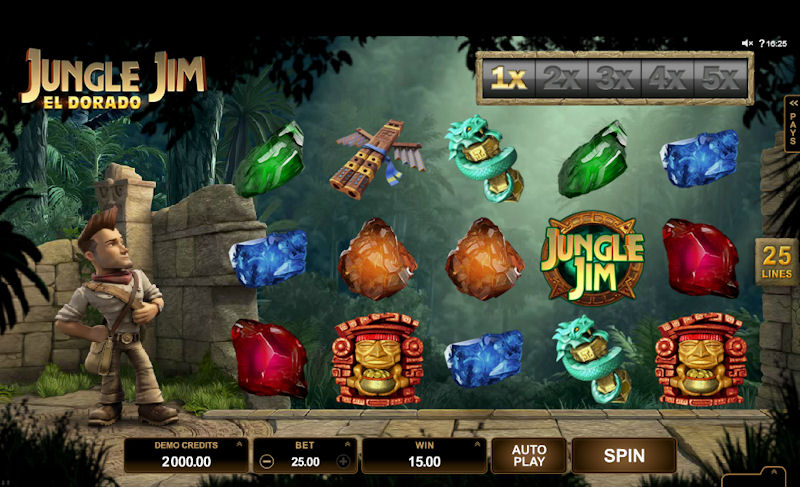 Now we know it’s not unknown for slot developers to copycat successful games from their rivals, but we got a distinct feeling of déjà vu when we first loaded Microgaming’s Jungle Jim El Dorado slot. The background setting of an Aztec ruin in a South American rainforest; the title character stood by the reels occasionally interacting with his environment and the action on the ‘reels’; the way the reels don’t rotate but cascade like Da Vinci Diamonds Tumbling Reels do . . . ah, yes! It’s awfully similar to NetEnt’s Gonzo’s Quest isn’t it?

So assuming you’ve never played Gonzo’s Quest and pretending that we haven’t either, what does Jungle Jim El Dorado slot do to rustle up its treasure? Well the starting point is five ‘reels’ with twenty-five paylines across them. But from the first spin you’ll know this is a rather different beast from the majority of online casino slots. Mentioned earlier, the symbols on the reels cascade into view the way that was first seen with IGT’s legendary Da Vinci Diamonds slot.

Wins still occur when matching symbols line up on paylines like a traditional slot, but once the win is banked the symbols explode into dust causing the symbol set to tumble down potentially creating another win. This mechanism is not only delightful to watch, but the chain reactions of wins it can give rise to is a fantastic way to literally enrich play. Jungle Jim enhances this with the additional element of a multiplier meter that advances with each step of a chain reaction, stepping up to a maximum of x5 to quintuple the fifth sequential win and beyond. Now haven’t we seen that before too? . . . hang on . . . it’s coming to us . . . its . . . its . . . just like little Gonzo on his quest again.

Enhancing Jungle Jim slot’s basegame is a Wild symbol, with its usual power to substitute for all other symbols except this game’s Scatter. Three Scatters in view trigger this slot’s free spins feature, which begins with ten free games (which can be retriggered indefinitely) and is played with an enhanced multiplier meter above the reels that triples the steps of the meter seen in the basegame. This, as you can imagine, makes this a rich hunting ground for Jungle Jim to net you some very big wins.

Jungle Jim El Dorado slot puts us in a dilemma. It is undoubtedly a really good slot, but it is also undoubtedly a shameless attempt by Microgaming to cash in on the extraordinary popularity of NetEnt’s Gonzo’s Quest. True, Gonzo’s Quest was inspired by the Tumbling Reels of Da Vinci Diamonds, but NetEnt did innovate with its additional features and wonderful presentation of its theme.

With Microgaming’s talent and resources, we’d expect better of them than to rip-off Gonzo so blatantly, and we would send them to the naughty step if we could. If your favourite online casino only features Microgaming slots we can forgive you for playing Jungle Jim El Dorado slot because it’s a fantastic online slot. But if you have the choice, we think you should respect NetEnt’s originality and give Gonzo the benefit of your bets rather than this brazen pretender to his throne.