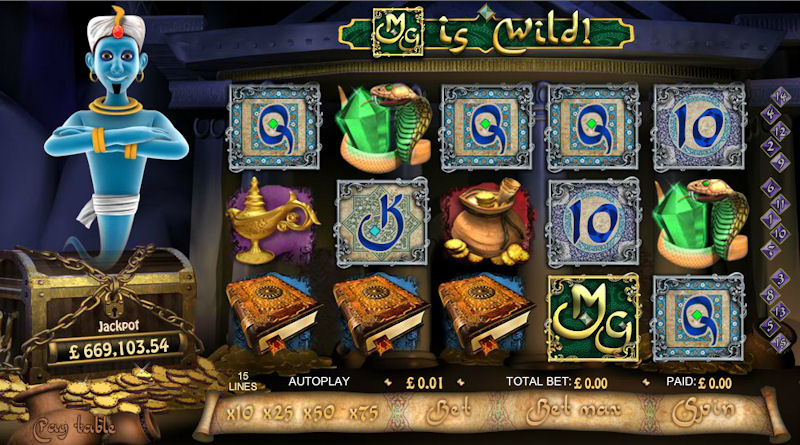 With a puff of smoke, it now falls for us to review Random Logic’s Millionaire Genie slot, promising in its title a little mythical Arabian theme and (hopefully) a whacking wad of cash if the Genie grants your wishes.

True to form Millionaire Genie does go with a theme that plunders the famous tale of Aladdin and, more specifically the Genie in the Lamp with his power to fulfil your heart’s desires.

In doing so it adorns its five reels with rather lovely symbols, presenting the classic K, Q, J, 10 symbols as beautiful Arabic murals and its higher paying symbols as images of treasure, veiled maidens and ancient tomes. Fifteen paylines criss-cross the reels, with a betting range of £0.15 to £15.00 giving plenty of scope to have them all in a spin whatever your budget.

The Millionaire Genie is in play as this online slot’s Wild Symbol, with only two other symbols beyond its power to substitute for them. Those are the Bonus Scatter and Scatter symbols, which both account for the two bonus features that may be triggered by their appearance in the basegame.

With respect to the Scatter (bearing the wispy face of the Genie himself) this is an award of a random number of free spins if three or more Scatter trigger the bonus, enhanced by the Genie adding Sticky Wilds to the reels during those free games.

Sighting three of more of the Bonus Scatter on the basegame of this online slot, grants you the key to the Genie’s Palace Bonus Game. Played out on a second screen, this bonus sees you attended by three veiled beauties concealing instant cash wins.

Your pick reveals that prize but signals three new maidens to crave your indulgence, this time bearing hidden multipliers which will be applied to that cash once your choice is revealed!

Whilst the Millionaire Genie’s base and bonus feature games can become a rich source of payouts for lucky players, the millionaire-making potential of this online slot lies in its mystery progressive jackpot prize.

There is no password combination to this prize amongst the symbols on these five reels, so it can randomly trigger on any spin no matter its outcome or stake bet although it’s worth being aware that higher value bets will increase the probability of the progressive jackpot event happening.

There is also no intermediate game that has to be played to bag the headline prize either, as there is with Microgaming’s Mystery Progressive Jackpot games, so if the Genie likes the cut of your jib he’ll turn over his treasure to you with no further hurdles to tease you.

As for expected payouts, Millionaire Genie has lived up to its name on several occasions and was heading above £2 million at the time of this review . . . so well worth giving this Genie’s reels a rub to see if he might grant you your wish for vast wealth.

Millionaire Genie is not an exceptionally original online slot in view of its theme and bonus features, however it plays and pays very nicely making it a fine set of reels to give a spin if you’ve not already made friends. Add on its progressive jackpot and that’s the cherry on top for us to recommend getting down with the Genie if he’s haunting the ranks of slots at your favourite online casino.