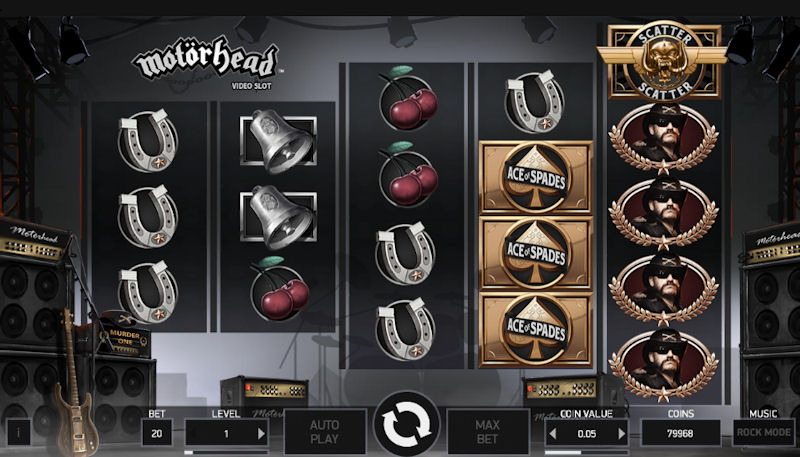 It’s not often we review a slot that comes with a warning at the beginning that ‘This slot contains flashing lights that may not be suitable for photosensitive epilepsy’. Thankfully the risky flashing lights seem to be confined to the opening live concert footage of Motörhead performing Ace of Spades that precedes this slot’s reels appearing, and this intro can be skipped if you’re worried you won’t be able to join the crowd enjoying NetEnt’s tribute to the mighty metallers.

The stage for playing Motörhead slot is built on an intriguing line up of five reels, that begin with two that display three symbols when stopped, two that up that to four symbols, whilst reel five puts five symbols in view. This unusual configuration allows seventy-six paylines to thrash out wins on the reels, an almost auspicious number since Motörhead formed in ’75.

Symbols include, of course, the legendary Lemmy as the top-paying symbol on the paytable, with an Ace of Spades Wild capable of subbing for all but the Motörhead Logo Scatter where it will conjure up a win.

So far, so classic video slot gameplay, but what features turn up the volume to ‘11’ on Motörhead slot? Well, the first feature to step into the spotlight is this slot’s Mystery Reel Feature. Appearing in stacks like the stacks of Marshall amps that powered Motörhead’s sonic assault, these symbols appear on at least one reel of every spin in this game.

Once stopped they then reveal which single paytable symbol they’ve all been hiding, sort of like a semi-Wild. Only the Scatter is excluded from the symbols the Mystery Symbols can reveal, and if multiple adjacent Mystery Reels turn up on a spin it can unleash quite a battery of big wins.

Another bonus feature of Motörhead slot’s basegame is the Bomber Feature that can activate at random before a spin finishes. This places ‘Bombs’ containing a cluster of Mystery Symbols above the reels, detonating to overlay a minimum of ten instances onto the reels. This has much the same effect as the Mystery Reels feature, but it’s worth noting that they are mutually exclusive events – if the Bomber Feature triggers, the Mystery Reel Feature won’t be active on that spin.

The bonus finale of Motörhead slot is its Free Spins feature, which needs the classic line-up of three Scatters hitting the middle three reels of the basegame to usher in ten free games. Whilst you can’t encore the free spins during the feature, the chances to blow a hole in the paytable are amped up by the Mystery Reels mixing in a cocktail of Wilds to their usual trick, which can result in some pretty spectacular results.

The release of Motörhead slot was quite a bittersweet moment for us, since it happened only months after the untimely death of the group’s charismatic frontman Lemmy, signalling the likely end of the road for the band.

NetEnt had to make this a fitting tribute, and we’re pleased to see it’s done a cracking job of honouring the band with a slot that has all the energy and excitement Motörhead brought to its live shows and recordings. In The Ace of Spades, Lemmy bellows out ‘The pleasure is to play’ and with Motörhead slot we think the pleasure will be all yours.