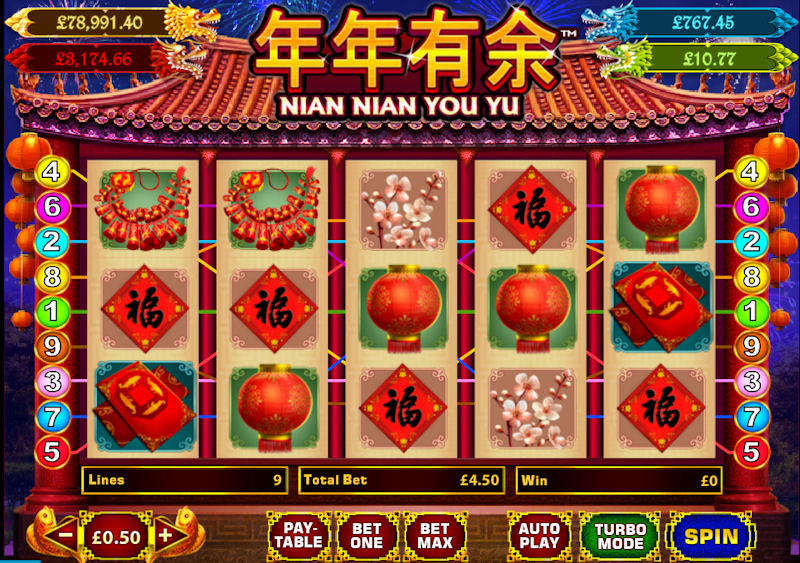 Online slots come with many themes, and usually their title can be a quick indication of the likely style you’ll find, but on first hearing about Playtech’s Nian Nian You Yu slot we were a little flummoxed.

Had the designer had a problem with a sticky keyboard when typing in the project’s name? Google being our friend in these matters, it quickly become clear that Nian Nian You Yu is a popular expression amongst Chinese during their New Year celebrations, roughly meaning ‘may every year end with ample surplus’.

So now you know, and Nian Nian You Yu slot sports an appropriately festive Chinese theme, its reels decked with lanterns, dim sum, dragons and firecrackers.

To achieve the sentiments of its translated meaning, and turn some spins into an ‘ample surplus’ of cash at the end of a session, Nian Nian You Yu slot has a nice, simple basegame of nine paylines, with very flexible betting from £0.01 per active payline up to a more lavish £50.

A quick glance at the paytable shows abroad range of possible wins, with a headline award of 10,000x your linebet if five dragons land on an active payline. A Wild Fish symbol has no pay value itself, but can work its magic by substituting for all other symbols, except the Scatter, where it can conjure up a win.

The Scatter is also a simple example of its type, paying when two or more are in view but not acting as a trigger to any additional bonus features as is common with many video slots. Aside from that, Nian Nian You Yu slot has no more special features to its basegame, although fans of rapid play will probably like the optional Turbo mode this game offers which lets you bang though games at a very brisk clip as you mash the spin button.

Aside from its simplicity, Nian Nian You Yu slot’s appeal for some players will lie with it being a gateway to one of Playtech’s legendary Mystery Progressive Jackpot prizes. This feature can be triggered at any time on any spin (i.e. there’s no prescribed triggering event such as achieving a specific combination in the basegame), although it’s worth knowing that the higher your stake on the basegame the more likely the feature will trigger.

Should your luck be in, the Dragon Jackpot game is your destination, where a wheel of fortune will decide which of the four levels of Mystery Progressive you will ultimately win. Each spin will award one of four Dragon colours, and the first colour to be won three times signals the progressive level you have won.

Naturally it’s the Golden Dragon you’ll most want in triplicate, since that’s the key to the biggest jackpot, and quite a chunk of change it is too . . . a seriously ample surplus!

Nian Nian You Yu slot is a very streamlined slot in many ways, so if you love an ample surplus of bonus features this is unlikely to be a go-to game for you. However if you just want a quick hit of no-frills slot gaming focused tightly on the basegame yet with a little extra thrill of playing unexpectedly for a progressive jackpot, then this Oriental themed slot could be your lucky charm.