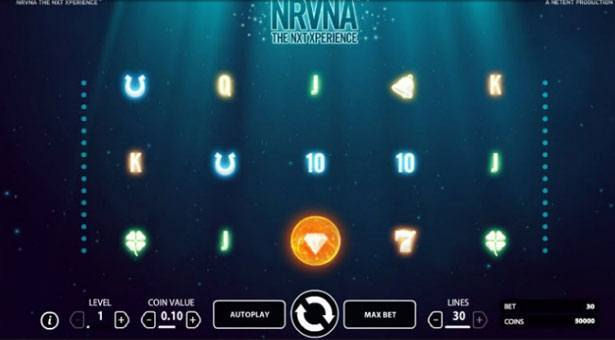 When we first heard that NetEnt were going to be releasing its NRVNA slot we assumed two things. One that someone in the press office was allergic to vowels (irritable vowel syndrome?) and two it was a musical tribute slot to Kurt Cobain, following in the wake of NetEnt’s Jimi Hendrix and Guns N’ Roses slots. Both assumptions proved wrong, although this slot’s full title of ‘NRVNA The NXT Experience’ still seems a bit too vowel averse to us.

Anyway, grammar issues aside what does this five reel, thirty payline slot bring that makes it the N(e)XT experience? Well, it’s definitely ploughing the same spacey vibe pioneered by NetEnt’s own stellar performer, Starburst. From the galactic background, glowing translucent symbols and euphoric synth soundtrack it all hints at a far-out ride, perhaps with sights and sounds never before experienced by humankind. If that all sounds a bit ‘cosmic’ then – sure – the presentation is very ‘New Age’ but the actually features of this online slot are mostly ‘old school’.

There are just two feature symbols to watch for on NRVNA slot’s basegame, being – surprise, surprise – a Wild and a Scatter Symbol. The Wild does the usual substitutions where it can transform a spin into a win, and will triple any pay it weaves its magic into.

The Scatter is the only symbol beyond the Wild’s influence, and this brings its own desirable charms into play when three or more are in view, since this triggers between ten and thirty free spins.

Free spins bonus features on online slots often come with additional twists to encourage big wins built in, and with NRVNA it’s no different. Here the ‘NRVNA Wheel’ adds the intended magic, with each free spin accompanied by a spin of this separate wheel-of-fortune device to decide if a multiplier applies to any win from that spin (up to x10 the standard award) and / or if up to two extra free spins will be added to the feature.

This is all good stuff, and can certainly help assemble some very nice wins, but we can’t pretend that we were hoping for something a little more unusual to justify the billing of this online slot as the NXT experience. Perhaps the NXT experience is just like the ‘next experience’ only with no vowels and rather like something you’ve experienced before…

In truth NRVNA isn’t a bad online slot by any measure – it does everything a good basic video slot should do – but compared to NetEnt’s usual standards it’s a little bit ‘ordinary’ in our opinion.

We guess it’s intended to appeal to players who went bananas for Starburst (so pretty much every online slot player in the known universe) but it simply doesn’t have any quirks that justify its billing as the NXT experience.

In time it might become a smash hit like Starburst (and we’ll keep a hat on standby to eat if that happens) but we honestly think NetEnt have far more entertaining slots to spend your time and money on.