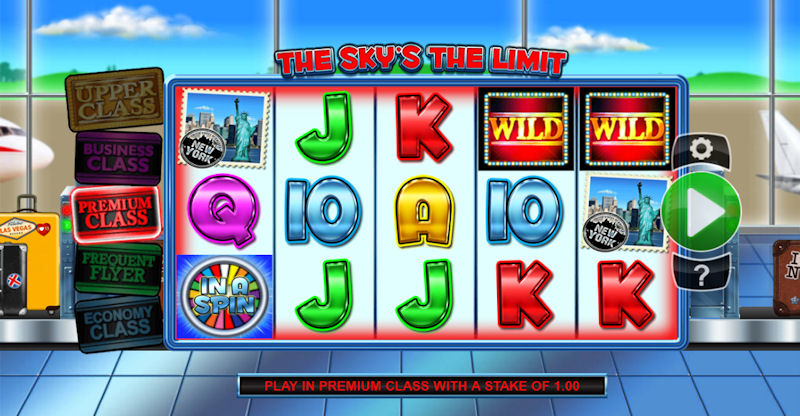 An exclusive slot to Sky Vegas, The Sky’s The Limit is rather appropriately titled but does this aviation-themed five reeler from CORE gaming fly high amongst the best online slots, or is it a budget booking you’ll wish you’d not checked in for?

Like many a good online slot, The Sky’s The Limit goes for the tried and tested formula of a solid five-reel, twenty-payline format for its basegame, this time placed in an attractive ‘arrivals lounge’ setting with a baggage carousel conveyor belt drifting past in the background which, as we’ll find later, isn’t just for show.

Playing to its theme of air travel, staking on The Sky’s The Limit is linked to cabin classes – fly Economy Class and your stake is set to an economical 20p, whereas Business Class slot jockeys can stake between £2 and £500 per spin.

Interestingly forking out to fly this online slot with a higher ‘class’ stake does come with privileges as the higher the class you can afford the better the RTP figure this online slot can deliver you.

One Class you can’t choose is Upper Class, but this can be earned as an Upgrade, which brings us neatly to that unique bonus feature of this themed slot.

All ‘upgrades’ are triggered by the Upgrade Scatter symbol appearing on reel five, and bump players up to the next class for a single free spin which can retrigger further upgrades too.

The extra bonus of getting bumped from Business to Upper Class by this feature is that this awards five free spins at this level, with any Wilds spun up subsequently locked in position for the remainder of that free-spinning flight. Very nice indeed.

A second screen feature that also can be triggered from this online slot’s basegame is the In A Spin game. Engaged when three or more In A Spin Scatter symbols are brought into view on the main reels, this is a simple wheel-of-fortune game with multiple cash prizes on offer including one, two or three mystery awards depending on whether it was three, four or five scatters that brought you into the game.

We can’t say this is the most inventive exploration of this slot machine’s aviation theme, but the payouts are decent so it balances out that minor disappointment.

Where The Sky’s The Limit slot does make neat use of its theme is with its randomly triggered Secondary Bonus feature. Remember the baggage carousel we mentioned earlier? Well, it can stop at any time and three items of baggage will be whipped onto the reels for the player’s consideration.

One pick is possible, and each bag contains one of seven bonus events that will spin the lucky player up a guaranteed win. Space prevents us listing all the options here but, take our word for it, you won’t be disappointed with the rewards any one of these baggage borne bonuses will declare.

The Sky’s The Limit is a truly feature-packed online slot that should reward frequent flyers on its paylines. If you are playing on a budget it is worth noting that there are plenty of twenty-payline video slots that can offer better RTP figures if you can’t afford to go Business Class here, but this is still a very entertaining game to play and an excellent addition to Sky’s exclusive fleet.