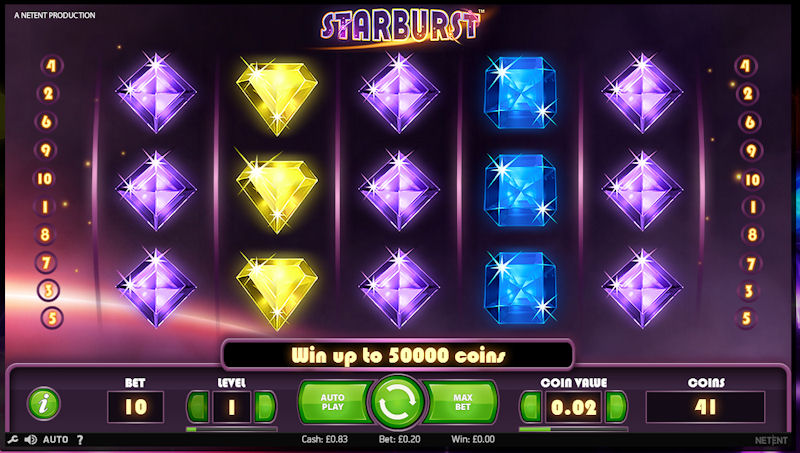 Starburst Slot has become one of the biggest hits for its developer NetEnt and, after its debut, quickly joined the ranks of hot online slots that no self-respecting operator should be seen without. So what is it about this five-reel, ten payline video slot that gives it that extra sparkle?

Well, in a sea of multi-payline, feature-packed slots with seemingly endless lists of bonus features Starburst Slot delivers a refreshingly simple game that seems to prove the famous KISS principle – Keep It Simple, Stupid! This is actually a rather stripped back affair with all the focus on the classic slots basegame, with a few twists that add a little extra spice to the mix. And judging from the success of Starburst Slot that seems to be a thoroughly winning combination!

The presentation of Starburst Slot clearly nods to the classic Bejewelled games, using a sumptuous array of gemstones as its symbols, augmented by a BAR and Lucky 7 symbol that also lends it a familiar Vegas arcade slot feel.

Better yet, players will be looking to find the game’s Starburst Wild spinning into view on the second, third or fourth reels as this adds a little sprinkle of that extra magic (and hopefully bigger winnings) to the Starburst experience.

Like a traditional Wild, the Starburst symbol can substitute for all other symbols, but it has two extra properties when it pops into view; first it expands to cover all visible positions on its reel increasing the possible wins from that spin, then triggers a single re-spin of all other reels for yet another chance to bag some cash!

And what if that re-spin brings another Starburst Wild into view? Well that repeats the process, so you not only have two reels now covered exclusively with Wilds, but another free spin with those reels held. In fact this feature offers the maximum potential for three re-spins with the final one having all three middle reels held in play as Wilds – now that’s definitely something worth playing for!

The other feature that makes Starburst Slot such a treat is payline wins are possible ‘both ways’. The classic basegame of online slots requires that three or more matching symbols must land on an active payline to trigger a win, but these must be adjacent symbols starting from the first reel.

Starburst shuns this convention and will also reward lines formed from the last reel going left too, creating more opportunities to spin a win. This gives Starburst Slot a feeling of extra energy in play, with the sensation that wins crop up quite frequently, especially if you’ve got all ten paylines in action (and to be honest why play any other way?)

Starburst Slot really does deliver a superb experience that locks into the essentials of what makes a video slot so compelling. It offers a huge range of betting options from 10p to £100 a spin, giving every player a way to win, beautiful graphics and sound to enhance the gameplay and rich rewards for the very lucky with regular wins for many.

Factor in this game’s very decent RTP figure of 96.1% (i.e. good news from the player’s perspective) and Starburst becomes a pretty irresistible proposition if you’re after playing one of the very best online slots today.

Bonus Key Qualifying Criteria: New players only. £88 is granted in FreePlay (FP). FP must be claimed within 48 hrs of receiving the email and expires after 14 days. FP wins are credited as bonus and capped at £15, exc. JP win. Bonus wins are capped at £500. To withdraw bonus & related wins, wager 30 x (bonus amount) within 90 days. Wagering req. vary by game. This offer may not be combined with any other offer. Deposit balance is available for withdrawal at any time. General withdrawal restrictions & full T&Cs apply.