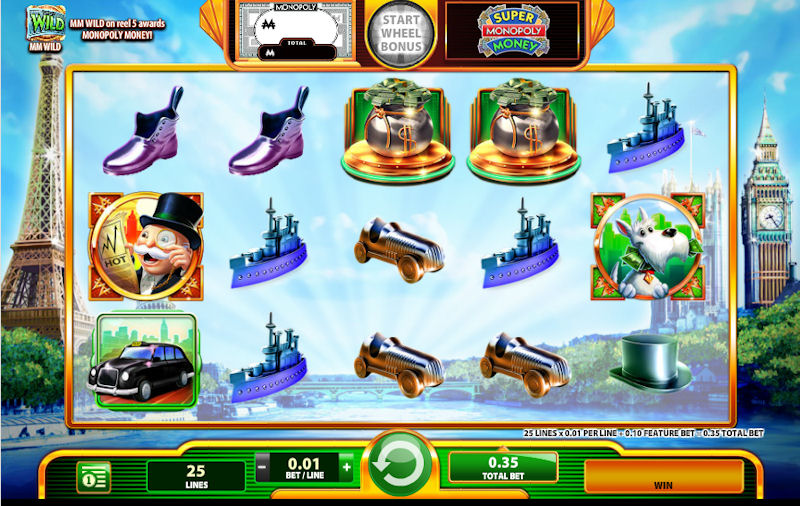 WMS is one of a handful of slots developers that has a foot in both the land-based and online casino markets, and one of its games that has made a considerable splash in both is its Super Monopoly Money slot. Based on the legendary Monopoly property trading board game, this themed casino slot offers an intriguing set of features that add a certain extra razzle-dazzle to its basegame which has won it a huge following wherever it’s available.

The basegame of Super Monopoly Money slot is a twenty-five payline, five reel affair that, like all good Monopoly slots, makes good use of the iconic elements of the original bard game to populate its reels and paytable.

This all pays and plays very well, but beyond a traditional Wild and Scatter Bonus symbol, this themed slot throws in extra Monopoly Money Bonus and Monopoly Money Wild symbols too. The crucial feature to note of these ‘Monopoly Money’ symbols is that any winning events they trigger are paid out in Monopoly Money rather than usual cash.

If that sounds like a bit of a swizz, don’t be too hasty to jump to conclusions (after all, why would this slot be such a hit if this ‘feature’ cheated players out or real cash wins?) The Monopoly Money you can bank on this slot has plenty of value, since it is the only currency that you can use to play its fantastic Wheel Bonus feature that can pay out a proper stack of real cash!

Before we get to the Wheel Bonus feature that is this Monopoly slot’s star attraction we should also mention two other bonus features that give this game reel appeal. First, keep a beady eye out for the basegame’s Free Parking symbol. This can randomly trigger a player pick from five concealed options that then transform it to another symbol to potentially generate an unexpected win, or trigger a bonus feature.

Secondly three or more of the Bonus or MM Bonus Scatters in view will trigger this Monopoly slot’s free spins feature, with a headline of fifteen free spins possible with a five-symbol trigger event. Alternate reels are used for these spins, more richly populated with Wilds and Bonuses, plus re-triggers of this feature are possible too making this a round that can really stack up some big wins.

Finally we come to the much-vaunted Wheel Bonus feature. As mentioned earlier, this can only be played with accrued Monopoly Money, and is a Wheel of Fortune gamble that can turn your Monopoly Money wagers into real cash with multipliers in play to inflate the conversion. This can be an astonishing 200x if a spin proves very lucky indeed! The Wheel Bonus is a fantastic feature and the single biggest reason to hunt out this online slot on your next session.

Super Monopoly Slot may seem slightly daunting at first with its unusual feature set suggesting greater complexity than actually exists. However, trust us; a quick session will soon reveal it’s both a doddle to play and that this slot’s novel ‘funny money’ feature is the key to some very serious real-money wins.