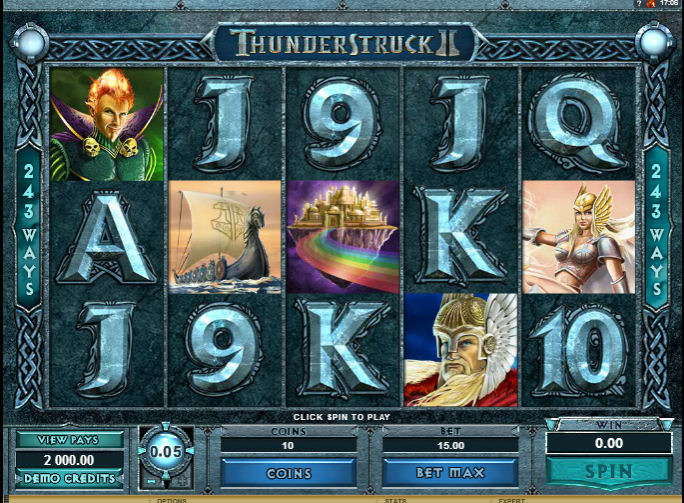 Microgaming’s original Thunderstruck slot became a firm favourite with online players after its release in 2003, so it’s a little surprising that its sequel, under review here, took a further seven years to see the light of day.

However, the wait was worth it for Thunderstruck fans since Thunderstruck II returned to the ancient Norse theme, but with some new twists to its gameplay to woo them to its five moody, atmospheric reels. But what if you’ve never engaged with the Norse gaming gods on these reels? Is now the time to strike, like a lightning bolt from the heavens?

The basegame of Thunderstruck II is built on Microgaming’s alternative payline mechanism billed as 243 Ways to Win. Seen on other Microgaming hit slots like Avalon 2 and Game of Thrones slot, this treats all paying symbols as if there were similar to Scatters, and so three or more only have to be in view on consecutive reels (starting at reel 1) to generate a win.

A Wild symbol – the Thunderstruck II logo – assists with generating wins with the usual Wild power to substitute for other symbols with the exception of Thor’s Hammer Bonus symbol.

You can also brew up a storm of wins on this slot’s basegame if the randomly triggered Wildstorm feature strikes, as this will convert between one and five of the reels into wholly Wild domains then respin any remaining reels to seek your fortune.

Where loyalty to Thunderstruck II is really repaid is with its free spins bonus feature, which is framed around the Great Hall of Spins. Entry to the Hall is through three or more of Thor’s Hammer symbol spinning into view on the basegame, and is a lobby to four levels of free spin awards.

On your first four visits, the Valkyrie feature is your reward, with ten free spins, with wins boosted by a 5x multiplier. Visits five to nine earn you the right to ride for free fifteen times in the Loki feature, with a Wild Magic symbol to enhance proceedings.

Odin hosts the free spins for your tenth to fourteenth visits to the Hall, with twenty spins and a Multiplier Wild along for the ride, whilst the top level puts Thor in charge of twenty-five free spins, where consecutive wins will rack-up a multiplier meter to dramatic effect on those winnings.

Once you’ve experienced all four levels of this feature you may freely choose any of them thereafter, but does this mean you’ll need to be playing Thunderstruck II in one mind-bendingly long session to achieve this honour? Thankfully no, for the Great Hall of Spins has a memory function, so all your visits to this feature are logged over time so you won’t need to devote a superhuman single session to unlock these bonus treats.

The loyalty feature of Thunderstruck II clearly marks it out as a superb online slot to engage with if you like the thrill of unlocking new features as you spend more time with it.

Thunderstruck 2 also exhibits medium volatility that should also suit players who like to trade less regular wins in favour of chunkier payouts when they do strike. The Norse-gods theme may or may not be your personal ‘thing’, but the overall presentation of Thunderstruck II is very pleasing indeed, and it’s easy to see why this game has become a video slot Valhalla for so many players at the best online casinos.