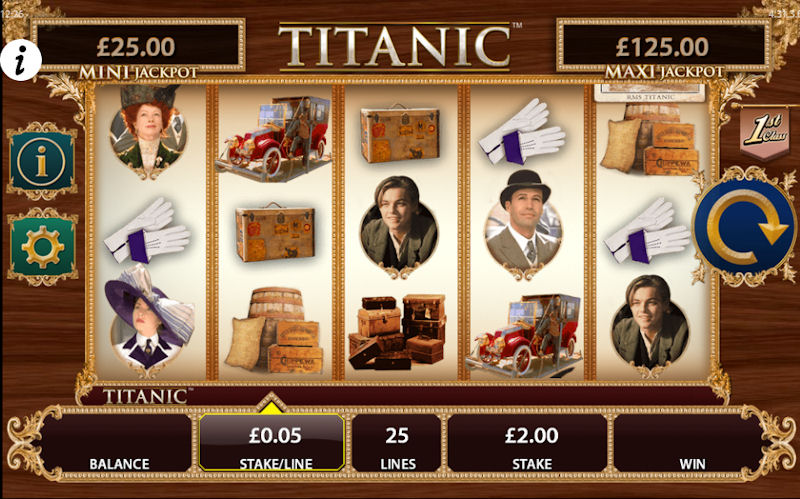 The choice of an infamous ship sinking in which many lost their lives does suggest a stunning lapse in taste from Bally for this twenty-five payline themed slot, but things are redeemed somewhat when you learn that it’s the 1997 blockbuster movie Titanic that is the source of inspiration for these five reels.

Personally we think the film was a terrible disaster too (and don’t even go there when it comes to Celine Dion’s mawkish theme song), but placing our prejudices aside does Titanic slot float our boat with its gaming entertainment?

Before setting sail on its five reels, Titanic slot passengers are faced with a choice of which ‘class’ they wish to travel. Basically this is where you choose your stake level, however it’s worth noting that higher staking to enter second or first class levels also unlocks more features in the game.

The cheapest Third Class stake is £0.35 per spin, whereas a minimum of £0.80 gets you into Second Class (adding Mystery Jackpots to expected features) and £2.00 or more puts you into First Class travel and access to top award jackpots with it.

Whichever ‘class’ you can afford to board with, the basegame remains the same and delivers classic online slot features with a couple of extra randomly triggered Wild features. The first of these is the Mystery Double Wilds Feature, which randomly overlays Wilds to the still-spinning wheels that will double any wins they generate at the end of the spin. Similarly, the Mystery Wild Reels feature can randomly trigger on any basegame spin to transform two of the reels into wholly wild affairs.

Also common to all ‘classes’ is the bonus Wheel Feature game that, as the name hints at, is a wheel-of-fortune triggered when three scattered Ship, Ship Wild or Ship Double Wild symbols sail into view on the odd numbered reels.

Spinning this wheel can win either an instant cash prize, two player pick games (the Pick Up and Safe Feature) or two free spin games (the Heart of the Ocean and Make it Count features). Mentioned earlier, going second or first class on Titanic slot adds Mystery jackpots to the menu of features and these are additional randomly triggered bonus games, where a player pick can win between 50x and 400x your linebet.

Despite the apparent complexity of Titanic slot due to its abundance of bonus features, a quick session soon reveals it’s plain sailing to understand the game and enjoy what it has to offer. Moreover the main features that will keep you interested in these five reels are common to all three ‘classes’ so, in our opinion, you won’t be missing out on much if your budget means third class is the way you need to play.

Since we’re not fans of the original Titanic film, we probably weren’t as engaged with this online slot as some players may be (and to be honest we thought more imaginative use could have been made of the source material), however it offers plenty of bonus features to explore making it an interesting adventure as longer voyages on these five reels reveal more of them, and trawl up very nice wins in the process.