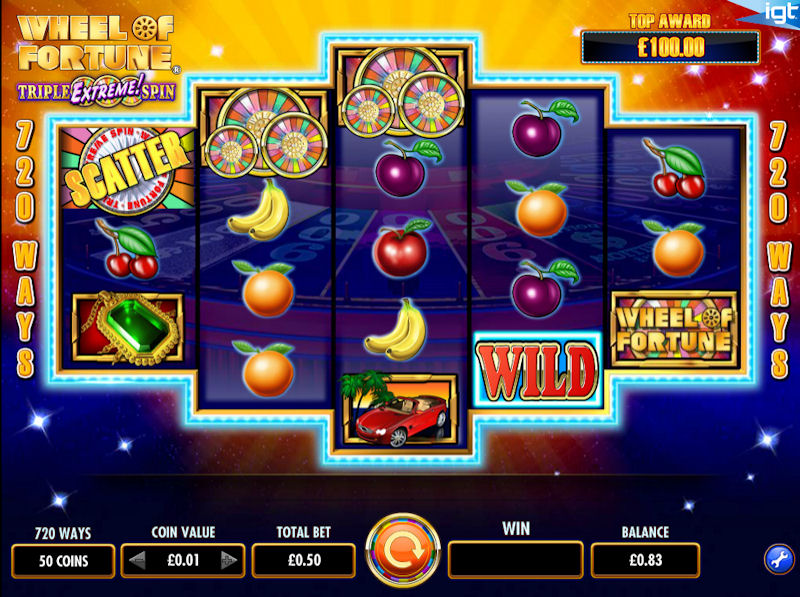 A venerable video slot amongst seasoned real-world casino and online slot jockeys was (and still is) IGT’s Wheel of Fortune, based on the long-running TV game show. Although still a great slot in its own right, IGT clearly felt this popular five-reeler was ripe for a new spin, and so we now rise to the challenge of its Wheel of Fortune Triple Extreme Spin.

Aside from now having a somewhat overlong title, IGT have given Wheel of Fortune Triple Extreme Spin quite a makeover from the earlier video slot, bringing IGT’s “720 Ways to Win with Multiway Xtra” format into play on the basegame (and someone in IGT’s marketing department obviously likes elaborate ways to describe slot features!)

What this means is this slot dispenses with traditional paylines across its five reels, so players are looking to see if three or more instances of the same symbol appear on adjacent reels, starting from either reel one going right or reel five going left.

In effect this creates the 720 ways to win, plus where more than one instance of a symbol appears on one reel that contributes to a win, the overall win is multiplied.

If this all seems a little complex, don’t worry as when played it all becomes clear and this mechanism has already proven a massive hit with online slot players who’ve taken to IGT’s Siberian Storm game.

We are a big fan of this feature and it really make this themed slot’s basegame feel more modern and involving.

So with its basegame already pushing our buttons, what can Wheel of Fortune Triple Extreme Spin deliver in the bonus game department? Well, first up is the Mini Wheel Bonus game that triggers when three or more Scatter Symbols fall into view on the five reels.

This simply momentarily transforms those Scatters into mini versions of Wheel of Fortune’s iconic wheel-of-fortune! Each then goes for a spin, and each result accumulates to deliver a pleasing little (and quite possibly large) bonus as a result.

Fun and rewarding as this is, the real bonus deal on this online slot lies with its Triple Extreme Spin Bonus game, which puts players in the hot seat when three or more instances of the Bonus Scatter symbol are in view.

Played out as a unique second-screen feature game, the Triple Extreme Bonus begins with a player freely picking three to five out of twelve on-screen envelopes to open, based on how many Bonus Symbols triggered the game. Each contains Red, Yellow or Blue ‘pointers’, which are added to the Red, Yellow and Blue Wheels of Fortune that come into play after the picks are completed.

In this way each wheel can end up with between none and three pointers indicating win positions on the completion of a spin, with a minimum of one pointer on the Red Wheel guaranteed.

Once all pointers have been assigned from a player’s picks, the three colour Wheels are spun with wins from the Blue and Red Wheel added together and – where the Yellow Wheel has a pointer on it – multiplied by the number the Yellow Wheel indicates as its result!

Wheel of Fortune Triple Extreme Spin is a very worthy inheritor of the legacy of Wheel of Fortune slot, and its headline bonus feature is a hugely entertaining way to win with its inventive use of its parent TV-gameshow’s core features. This has ‘hit’ online slot written all over it.