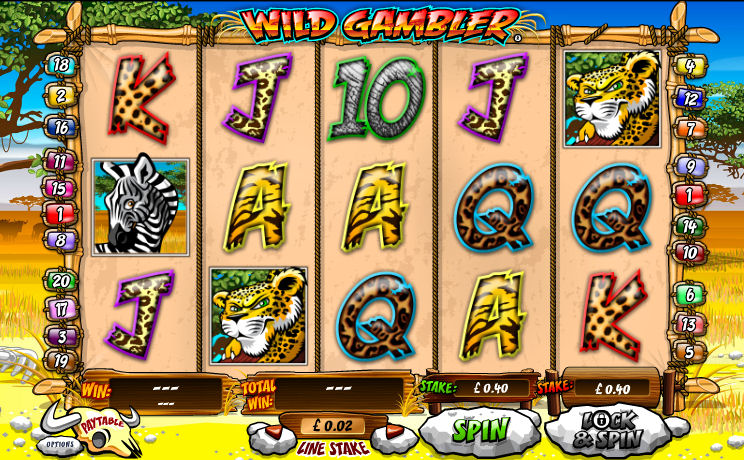 Roaring out of the jungle of online slots comes Wild Gambler from Ash Gaming, with a menagerie of cartoon-style wildlife prowling its five reels ready to shred some big wins from its twenty paylines.

This is an instantly attractive slot, with great sound, graphics and animation that put to shame many of the bigger name developers who’ve put out safari-themed online slots (and we have Raging Rhino from WMS Interactive in our sights here for starters).

The basegame is on first glance a relatively simple affair with just a Wild Lion in play as its single feature symbol, but scratching the surface of Wild Gambler reveals a very unusual creature feature indeed, which really justifies this slot’s moniker and reputation as a literally Wild beast.

Besides its traditional Spin button you’ll find a Lock and Spin button that’s key to this slot’s unique charms. This can be used in one of two ways. First, should a Wild (or Wilds) be in view on a spin, you have the option to lock them in place for the next spin, this being nicely animated with the symbol’s Lion being caged for the spin from which he breaks out as it ends.

Choosing to Lock and Spin comes at a price requiring an enhanced stake, since it will increase the chances of snagging a win so it needs to be used wisely, but it’s a very cool gamble to offer which can pay off handsomely.

The second way to use Lock and Spin is to actively choose any number of symbols to become Wilds ahead of a spin, which also can be modified further by adjusting the stake value shown above the Lock and Spin button to alter that choice to one that fits a stake value you’re happy to gamble.

This is incredibly flexible wagering – Ash Gaming call it ‘Play Your Way’ – which lets you balance stake against increased chances of winning in a way that’s as neatly tailored as one of Roger Moore’s safari suits in the 70s Bond films.

One final feature that needs mentioning is Wild Gambler’s randomly triggered free spins bonus game. Signalled when five meerkats pop-up to scan the scene at the bottom of the five reels, this is an award of eight free spins where any locked Wilds at that moment remain locked for the duration, and any new Wilds that appear are locked down too providing huge potential to bag some very big bonus winnings.

If it’s not already clear, we like Wild Gambler a lot. It not only appeals from its excellent presentation, but it also offers something a little special for online slot players that we think deserves your attention.

Its Lock and Spin / Play Your Way feature is refreshingly original and gives the player choices to alter the volatility of the game to suit their mood. If you’re feeling starved of wins, it’s easy to add some Locked Wilds into the next spin to hopefully end that drought and, providing you stay wise to the necessary premium applied to your original stake to exercise that option, it adds a level of control that’s as rare as some species in the Serengeti.

Wild Gambler is great casino entertainment that we thoroughly recommend you hunt down when you’re next on slot safari.