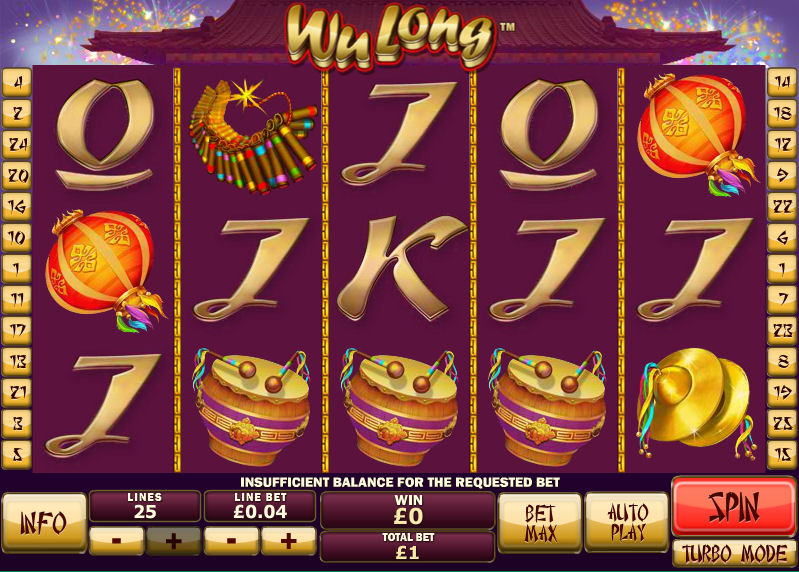 Wu Long slot was originally released by Playtech as a ‘seasonal slot’ (as we like to call them) launched to coincide with the Chinese New Year. Playtech has clearly made it a mission to expand its range of Asian-themed slots too, and Wu Long slot is just one of the games that sits in that category with a look and feel that mines popular icons of traditional Chinese culture, such as lanterns, dragons and pagodas. Refreshed with a progressive jackpot prize to become Wu Long Jackpot, what can this festive slot bring to usher you into a new year of prosperous gaming?

Under its festive trimmings, Wu Long Jackpot slot’s core gaming is built on a five-reel, twenty-five payline basegame. Betting options let you adjust coin value, and how many paylines are active per spin and juggling these lets you dial in wagers between a minimum stake of £0.01 up to a high-rolling £500 per spin.

We’ll cover the progressive part of Wu Long slot’s appeal later, but its paytable offers a fixed jackpot of 2500 times your linebet should five instances of the top-paying Gate symbol land on an active payline. For feature symbols, Wu Long keeps things super simple combining the role of Scatter and Wild into its Dragon Symbol, giving it tremendous power to not only generate wins from its power to substitute for all other symbols but also to trigger this themed slot’s free spins bonus.

Wu Long Jackpot’s free spins bonus commences with twelve free games if three or more of the Dragon Symbol appear in view on the basegame. Adding extra fire to these freebies, the Dragon Symbol also creates more opportunity for big wins in this bonus since it can both trigger extra spins and apply increasing multipliers to wins should two or more instances appear after a spin.

The multiplier can be stepped up to x6 in this round, and with theoretically infinite free games possible from retriggers it’s obvious why this feature is very popular with this slot’s players.

The final firecracker in Wu Long Jackpot slot’s celebrations is its randomly triggered progressive prize, the Dragon Jackpot. This can happen at any time during play no matter the spin result nor the stake bet, although the higher the stake the greater the probability the feature will trigger. Once in the Dragon Jackpot’s inner sanctum a single spin of its Wheel of Fortune will determine which tier of its four progressive prizes you will win.

Naturally the Golden Dragon is the most desirable prize with its pot starting at £20,000 and there’s a healthy one-in-ten chance your spin of the wheel will land you its good fortune.

Wu Long Jackpot is another Asian-themed slot from Playtech that won’t wow you with innovative features, however it’s a vey attractively presented game and the features it does include add plenty of thrills to the pursuit of results from its paytable.

Add in the potential it offers to win big from its progressive jackpot and it all stacks up to be a themed online slot that has all the key ingredients to keep many players happily spinning its five reels.