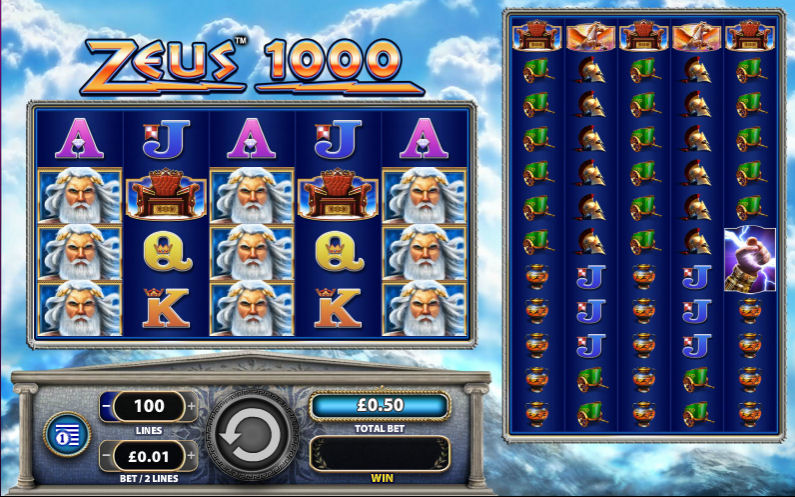 WMS made its name amongst the slot playing community by virtue of the land-based slots it created in the last Century, and was a relative latecomer to the realm of online casino gaming.

The reputation of its land-based Vegas slots gave its online versions instant traction with online players, and its original Zeus slot was one of the games that proved a massive hit in both the real and virtual worlds. Zeus 1000 is WMS’s latest development of the Zeus legend and ‘goes large’ with its Colossal Reels format.

The Colossal Reels engine that powers Zeus 1000 is a WMS design that builds 100 paylines across two separate sets of reels, one a a more traditional 5×4 affair, the other the ‘Colossal’ set of 5×12 reels.

If that sounds daunting, fear not, because playing Zeus 1000 is no more difficult than any other online slot, and the extra reels don’t compromise the core thrills slot players are after. The Colossal Reels simply add an extra visual treat and more ways to win.

A couple of special features add extra tension to spins on Zeus 1000, with the focus on the reels of the standard set. The first of these is the appearance of a stack of four Wilds on any of those reels, an event that triggers the corresponding reel in the Colossal Set to fill with Wilds too. The second special event is exclusive to the free spins feature of this game that follows the appearance of three or more Bonus symbols in view.

During free spins, should Zeus himself grace you with his presence as a four-stack on reel 1, then all other instances become Zeus Add symbols and a deluge of additional Zeus Add symbols are piled onto the reels for that spin. How many? Well, a minimum payload of 400 Zeus’s is your guarantee, but maximum luck unleashes the power of a 1000 leaving all reels groaning with Zeus (not a phrase we often find ourselves typing!). Suffice to say that such an overwhelming visitation from this legendary deity comes with great rewards for the faithful.

The presentation of Zeus 1000 is not quite as dramatic as we’ve seen with some rival slots, however it does exude a classic ‘Vegas slot’ feel that is common to WMS’s games. Moreover the Colossal Reels engine can build some divine wins, especially if this king of the gods favours you from his Mount Olympus hangout with an extended free ride on his mighty reels.