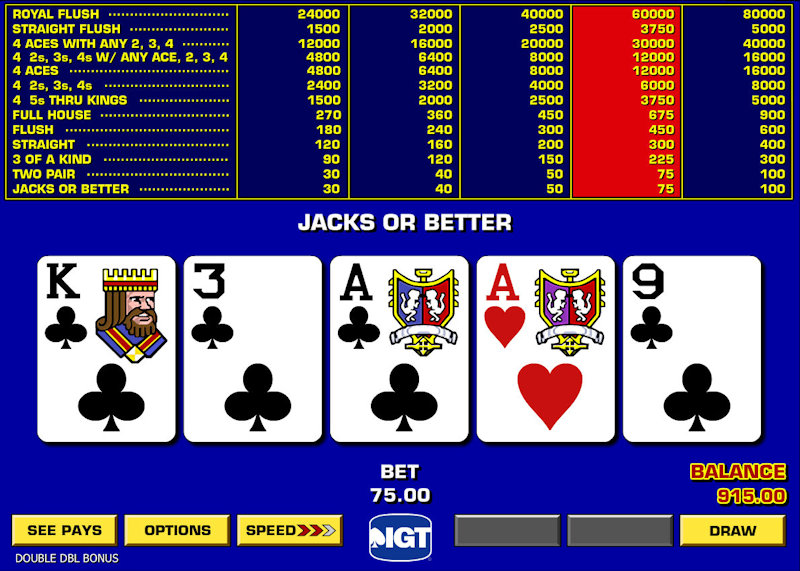 IGT has some heritage in coding Video Poker games, being one of the pioneering companies who introduced players to the whole concept of Video Poker back in the 1970s. It’s naturally transitioned the most popular variants in its Game King series into versions for online casino players, and that means where IGT’s been called in to bring the VP noise for an online operator you’ll often find Game King Double Double Bonus Poker in the inventory.

Aside from having a somewhat cumbersome title, Game King Double Double Bonus Poker also might feel rather retro in its look if you’ve never dabbled in Video Poker before. This game certainly ain’t going to win any prizes for cutting edge sound, animation and graphics! However, its design does authentically recreate the look and feel of playing the original real-world cabinets that started the Video Poker revolution. And we defer to IGT’s experience in what floats Video Poker fans’ boats in terms of presentation and gameplay, since its games have been doing the business for over four decades now!

Getting into the special attractions of Double Double Bonus Poker’s rules over a standard Jacks or Better format game, you’ll find it adds its bonus pay for four-of-a-kind Aces, 2s, 3s and 4s when the fifth card shows up from those four ranks too. Double Double Bonus Poker used to be highly sought-after by skilled players since its paytable resulted in an RTP of just a shade over 100% for perfect play, but with the online version you’re more likely to encounter the paytable that delivers an RTP of 98.68% for optimal strategy. That’s still a pretty decent figure though, and significantly more advantageous than online slots if you can invest the time to learn the necessary strategy that will eke the best long-term results from this game.

Like all IGT’s Video Poker variants, this is a game that’s all about the core mechanics of play and strategy, rather than eye-catching visuals to dress-up the action or recreate the real-world physics of handling playing cards. This might take some getting used to if you’re new to Video Poker games, but if you relish a different casino challenge that can richly reward skilful play, Game King Double Double Bonus Poker is undoubtedly a variant to look out for in your quest for classic entertainment in this genre.