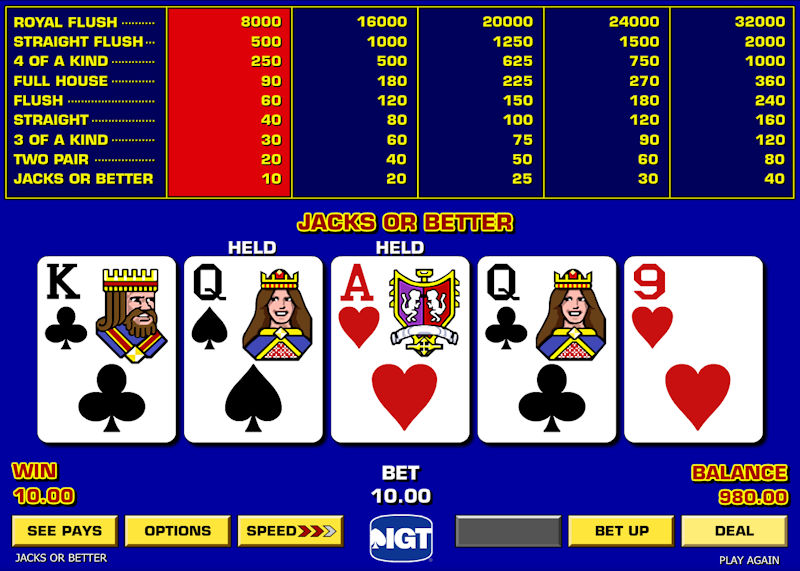 For fans of Video Poker, the classic Jacks or Better format remains one of the main draws for these players at the best online casinos. IGT was a pioneer of Video Poker, and its Game King series are pretty much synonymous with the game if you’ve encountered it at a land-based casino.

Now part of the formidable SG Digital group, Game King Jacks or Better has been transitioned into an online version letting a new generation of players discover the delights of this highly rewarding, strategic challenge.

Jacks or Better is the bread and butter Video Poker format that’s a great introduction to the concept, particularly if you’re coming to it from the world of traditional five-card poker games. The hand rankings should be familiar to poker fans, with the minimum rank being a hand containing a Jack or better (hence the game’s title) to hit the paytable. This version also keeps things simple with one discrete hand rank for a four-of-a-kind win, whereas other ‘Bonus’ Video pokers will often split this rank into a number of outcomes.

In terms of pays, this Game King version retains the ‘9-6’ paytable (that being the multiplier values paid for the Full House and Flush ranks respectively), which aficionados refer to as the ‘full pay version’ that can deliver a very favourable RTP of 99.54% if you know your strategy. This Jacks or Better version also offers the lowest volatility of the various Video Poker variants, so if you prefer the dynamic of more regular, smaller wins over less frequent success, but bigger pays when you do hit a win, then this version is the one to hunt out.

Our one criticism, which we’ve levelled at other Video Pokers we’ve reviewed, is IGT’s unwillingness to refresh the presentation of this game to something more 21st century. It would no doubt argue it’s an authentic (and affectionate) recreation of the original Video Poker experience player’s enjoyed back in the day at land-based casinos, but we’re not convinced that’s a worthwhile argument for having such clunky, ugly graphics and uninspiring sound.

Jacks or Better Video Poker is undeniably a great casino game to learn and play. The very favourable RTP that can flow from getting to grips with this game’s strategy is a great incentive to investigate this option, especially if you’re already into real-money card gaming such as Blackjack and five-card pokers.

The retro look and feel of this Game King version might appeal to nostalgia fans, but we feel differently. It doesn’t make this a bad game – far from it – but, we do reckon a makeover to match the more modern production values seen applied to online slots and table games like Roulette wouldn’t hurt to widen its appeal.