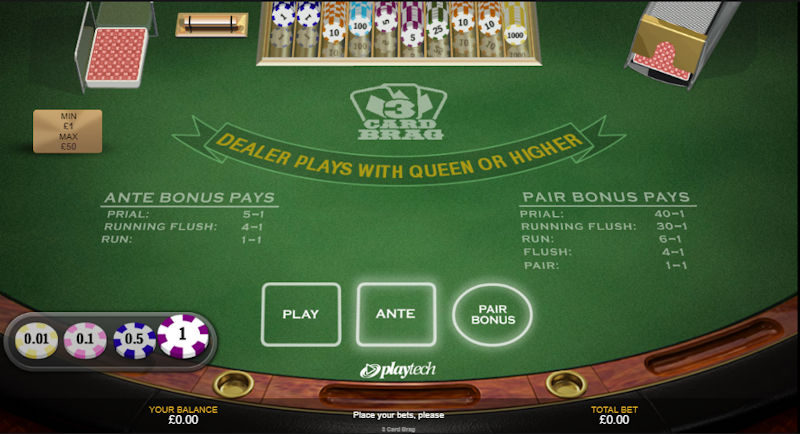 Amongst Playtech’s catalogue of more familiar casino table games, such as Blackjack and Baccarat, you’ll also find the distinctly less common 3 Card Brag. You may well have encountered Three Card Poker at a casino before, but that is a proprietary game owned by SG and so Playtech has craftily created its own version of that game with a little twist to stop it infringing SG’s rights. The difference other than in the name? Well that’s down to the hand-rankings as we’ll explain below.

Ahead of covering the pertinent differences between this game and Three Card Poker, let’s take a little look at the presentation of this RNG table. As one might expect from Playtech, the overall look and feel is very nice with correct perspective on the cards adding to the authenticity of the experience. We should note that this version still relies on Flash under the bonnet, rather than pure HTML5 code, so that does mean it’s not (yet) transitioned into the roster of Playtech games that are accessible on the majority of mobile devices.

Returning to the essential differences that make this a 3 Card Brag rather than a Three Card Poker, you’ll find the general gameplay is identical – even down to having a Pair Bonus side bet – so it’s the ranking of certain hands that you’ll need to take on board. First the Prial (Three-of-a-Kind in poker terms) is the highest-ranking hand, putting the Straight Flush (this time called the Running Flush in Brag) into second place. Secondly, you should be aware of the following order of hands in those two ranks:

Essentially ‘3’ is very much the magic number at this table! What should also be comforting for players knowledgeable in Three Card Poker is that the optimal strategy in that game can be carried over to 3 Card Brag. Better yet the pays on this table are subtly better than SG’s Three Card Poker so the long-term RTP makes it a better value bet.

From our review above you’ll see that 3 Card Brag might be harder to find than Three Card Poker at the best online casinos (not all of them have Playtech’s games), but if you’re seeking out some great casino poker entertainment this is definitely a very good game to watch out for.