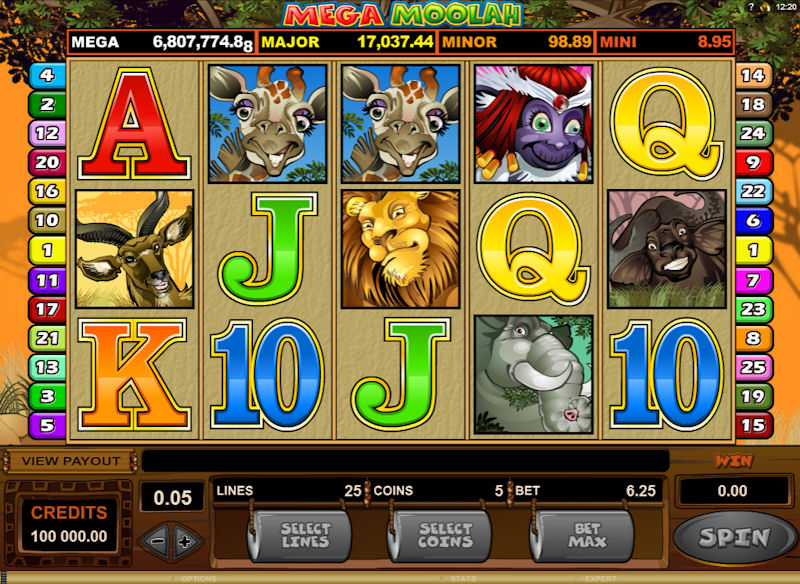 Microgaming’s Mega Moolah slot is one of the biggest beasts in the progressive jackpot jungle, being one of the few online slots that can rightly claim the status as a multi-millionaire maker! For any slot jockey that is seeking the ultimate payday when they play, Mega Moolah is undoubtedly very big game.

Befitting its big game status, Mega Moolah has a big game theme, with the wildlife of the African savannah gracing its reels. Thankfully, taming this five-reel and twenty-five payline beast is not the daunting challenge it might first appear, since the Mega Moolah basegame is classic video slots’ stuff with Wilds, Scatters and freespins in the mix to give players a wild ride on its reels. King of the Jungle on Mega Moolah’s basegame is, quite rightly, the Lion symbol which, also quite rightly, is Wild.

Aside from his majestic presence, you’ll be delighted by his ability to not only conjure up the biggest basegame payouts as the highest valued symbol on the paytable, but also his power to substitute for all other symbols, other than the Bonus Scatter, to trap other payline wins.

Another animal you’ll be keen to see on this themed slot safari is the Monkey, whose cheeky Scatter qualities means he only needs to be in view to be counted. Count three Monkeys at the end of a spin and you’ve just won yourself a further fifteen free spins, with the chance to retrigger those free spins while they are played out. All rather fun, and richly rewarding from both an entertainment and prize potential perspective.

So Mega Moolah already makes its case as a very fine video slot from its basegame alone, but it undoubtedly roars into the league of the best online slots when it comes to consider its bonus progressive jackpot game. The Mega Moolah jackpot is actually four tiered progressive prizes, going from Mini, through Minor and Major to the eye-popping Mega, all of which are up for grabs in a single Wheel of Fortune style game.

All the jackpots are not to be sneezed at, but with a baseline of £1 million the Mega progressive will probably make you pass out if you bag it in that single spin. Remember too that Mega Moolah’s popularity with online slot players also means its progressive prizes escalate at a very dramatic rate since a slice of each stake on each spin is siphoned into Mega Moolah’s bonus jackpots.

So how do you win the Mega Moolah millions? Well, just get playing as the bonus game is simply a random trigger that can happen at any time you play – it’s not linked to any symbol combination as a trigger so any player at any time can find themselves with a life-changing chance to play this online slot’s bonus game. That’s how a UK player walked away with more then £13 million from a 25p stake in late 2015!

New progressive jackpot slots are entering the market all the time, but Mega Moolah has held its position as one of the top slots in that field for many years now and just a quick session will soon reveal why. This is top-quality entertainment and the ever-present chance that you’ll suddenly be transported into the exclusive club of online slot millionaires adds a tantalising frisson to every spin.