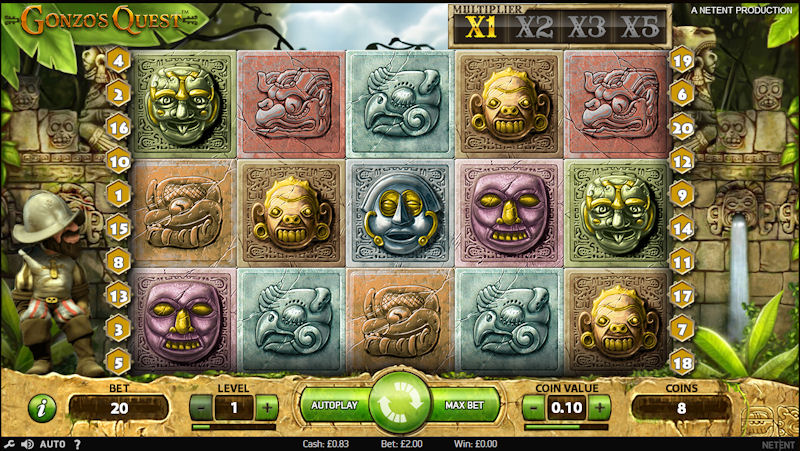 Just a quick trawl around a handful of the best online casinos to see which slots are listed as ‘most popular’ will soon leave you in no doubt that NetEnt’s Gonzo’s Quest is one of the galácticos (or superstars if your Spanish is a bit rusty). Since its release a few years back it’s quickly gained a loyal following and helped reinforce NetEnt’s reputation as go-to guys for some of the best online slots you’ll find.

Muppet fans might be mildly disappointed to find that the Gonzo in question here is one Gonzales Pizarro, a conquistador in search of Eldorado, the legendary lost City of Gold in Latin America. Whilst not the freaky Gonzo the Great (who’s hapless acts of derring-do where a highlight of the Muppet Show for us), this Gonzo is a comic little character too, who enlivens this online slot’s games with his hugely entertaining animated displays of joy when you win big. He is quite the mover, and executes an exemplary moonwalk from time to time!

Gonzo’s deft footwork aside, the central Quest on this slot focuses upon twenty paylines framing an unusual set of five ‘reels’. Christened ‘Avalanche Reels’ by NetEnt, these don’t spin but tumble their stone symbols into view and, where wins result, those symbols then crumble to cascade the symbols stacked above them into the space they vacate.

If this sound familiar to you, Gonzo’s Quest clearly pays homage to the Tumbling Reels mechanism of the legendary Da Vinci Diamonds slot and creates the potential for thrilling chain reactions that turn single spins into sequences of enriching wins.

Where Gonzo’s Quest goes further with its Avalanche Reels is that for each step in a sequence of ‘avalanches’ a multiplier notches up one level – with this in play it means the second win in a consecutive sequence is doubled and, should you enjoy a lucky streak of five wins in a row that fifth win is quintupled! That can be a pretty golden result we can tell you.

For its bonus game, Gonzo’s Quest lays on a free spins feature of ten ‘free falls’ for each combination of three Free Fall symbols to land on an active payline. Besides being preceded by a wonderful animation that sees the reels part momentarily to let Gonzo gaze upon the lost City of Gold, the values shown on the multiplier meter are tripled for all free spins, so even a single win will be tripled whereas a chain reaction of five or more will see the last spins in that sequence multiplied by fifteen.

The presentation of Gonzo’s Quest is truly first class, and makes a lot of rival slots seem rather weak and unimaginative in comparison. That in itself would make this online slot worth checking out, but NetEnt haven’t neglected the core engine of this game either and its Avalanche Reels make it a wonderfully compelling game – once you’ve experienced the visual and financial joy of a sequence of consecutive wins we think you’ll be utterly won over by Gonzo’s considerable charms.

This is a slot with a very well deserved reputation, and in our estimation one that ranks among the best online slots of all time. A modern classic.