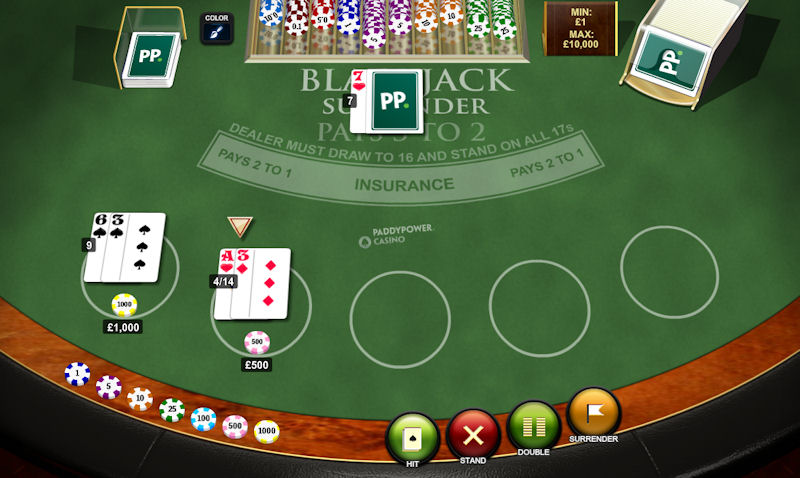 Blackjack Surrender is an online Blackjack variation found at the best Playtech-powered online casinos, which is based on the core rules of Vegas Strip Blackjack. As its name implies, its most obvious deviation from Vegas Strip game is that it includes a Surrender option, but let’s get into a little more detail of all the nuts and bolts you need to know about this fine game.

Surrender Blackjack is dealt from a six-deck shoe of standard playing cards (re-shuffled ahead of each game), and observes the usual rules of Blackjack paying 3 to 2 and the Dealer standing on all 17s. It’s also classed as an ‘American hole card’ game, so you’ll see the Dealer peek his cards for Blackjack if the upcard is an Ace or 10 ahead of the player’s first decision. The other important strategic rules for the player are:

Splitting is allowed for initial deals with two cards of the same value, but only one split is allowed per game. Where two Aces are split, the player may only receive one additional card to the two resulting hands after which they must automatically stand. Also a split hand of Ace, 10 or Ace, Picture Card is considered simply as a count of ‘21’ rather than Blackjack.

Doubling down is possible on any initial deal of two cards, or on any two-card hand created from a split. This decision doubles the players stake after which one more card is dealt to the ‘doubled’ hand which must then stand.

Insurance is available as a side bet option when the Dealer has an upcard of Ace and before they peek their hand. This choice is a fixed bet of half your initial stake that will pay out at 2 to 1 if the Dealer reveals Blackjack when they peek.

Surrender – this option is available to the player if they feel they have a strategically weak hand after the initial deal, and only after the Dealer has peeked their hand if that is necessary. This decision immediately forfeits the game, and half the player’s bet.

One final feature of Blackjack Surrender to be aware of is that if you can build a ‘7 Card Charlie’ (a seven-card hand without busting, which is a pretty rare occurrence) then that beats all other Dealer hands bar Blackjack.

With optimal play Playtech’s Blackjack Surrender offers an enticingly low house edge of 0.39% (RTP 99.61%), which makes this enjoyable game even more attractive. In truth the occasions where you’ll want to play the Surrender feature this game’s title so obviously advertises are pretty rare*, but that doesn’t detract from the sheer quality of this online Blackjack. If you like Vegas Strip style Blackjack games, then this is definitely another game to seek out on your next online session.