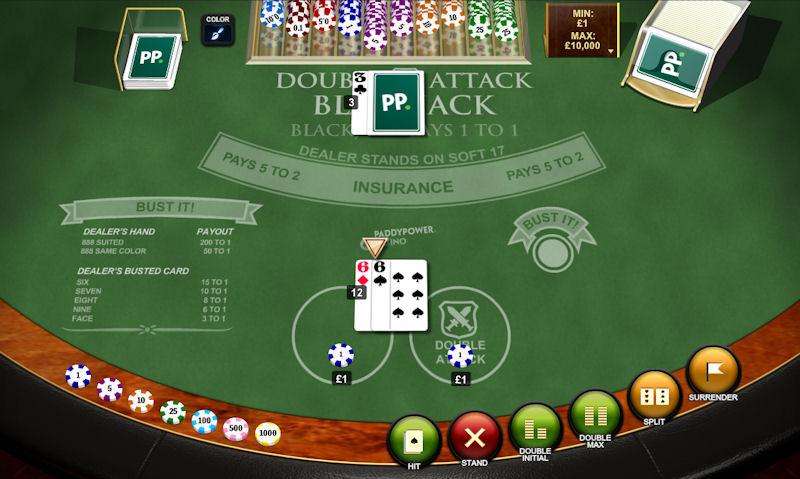 Variety is the spice of life, it is said, and one of the spices of Blackjack life is the Spanish Deck game. Spanish Decks dump all the ‘tens’ (but not the Picture Cards) to become forty-eight card packs, making the instance of a card valued at ten less likely in a game of Blackjack that uses them. Double Attack Blackjack is one such game that uses Spanish Decks – eight on this occasion – with a few other little twists worthy of your attention.

Double Attack Blackjack is from the Playtech software house, so you can expect a very slickly presented online Blackjack game that even lets you change the baize colour to suit your taste (and mercifully mute the frankly dreadful muzak that wouldn’t be seen dead in a department store lift). The layout indicates a Dealer Rule that is to stand on all 17s and Blackjack payout of 1 to 1 … 1 to 1? Yes, but don’t panic at that reduced pay from the traditional 3 to 2 for there are advantages to the Double Attack rules to compensate for this, as we shall explain.

Play Double Attack Blackjack and you’ll find that after your initial wager is confirmed, but before you’re dealt your initial two cards, the Dealer will be dealt their upcard. You then have the unusual opportunity to increase your bet, up to a limit of twice the original stake (the ‘Double Attack’ alluded to in this game’s title) if the upcard foreshadows a potentially weak Dealer hand.

This creates a great strategic advantage for the player, hence the rebalancing of the odds with the evens pay for Blackjack. Once you’ve made your decision to increase your bet or not, the game continues following conventional Blackjack protocols, including these common rules:

Peek – the Dealer will peek their hand for Blackjack, and only after the Insurance side bet had been declined / accepted by the player if the Dealer’s upcard is an Ace.

Splitting is permitted, with re-splitting also possible up to a maximum of four hands with one exception – Aces may only be split once, and can only receive one further card.

Doubling down is allowed once at any time on a hand, including after a split.

Surrender is possible at any time.

Insurance is offered as an optional side bet when a Dealer upcard is an Ace, with an unusual enhanced payout of 5 to 2 rather than the more common 2 to 1.

The advertised house edge for Double Attack Blackjack’s central bet is 0.47% (RTP 99.53%) for optimal play which is a pretty decent incentive to learn its strategy if you’re new to its rules.

The game also features an additional side bet if you like an extra bet per game. Called the ‘Bust It! Side Bet’ this pays if the Dealer busts with three cards, and offers the following odds:

This side bet carries a pretty hefty house edge (8.01%) so we’d steer clear personally, however if you think ‘8’ is your lucky number you might be tempted to give this a go from time to time.

Double Attack Blackjack is a very interesting alternative to classic Blackjack and if you find yourself playing a Playtech-powered online casino, it’s very likely to be amongst the game’s you’ll find there. If so, definitely give it a go – there’ll very likely be a demo mode offered to play though some hands for free – as its main twist on the first deal can soon become rather compelling.