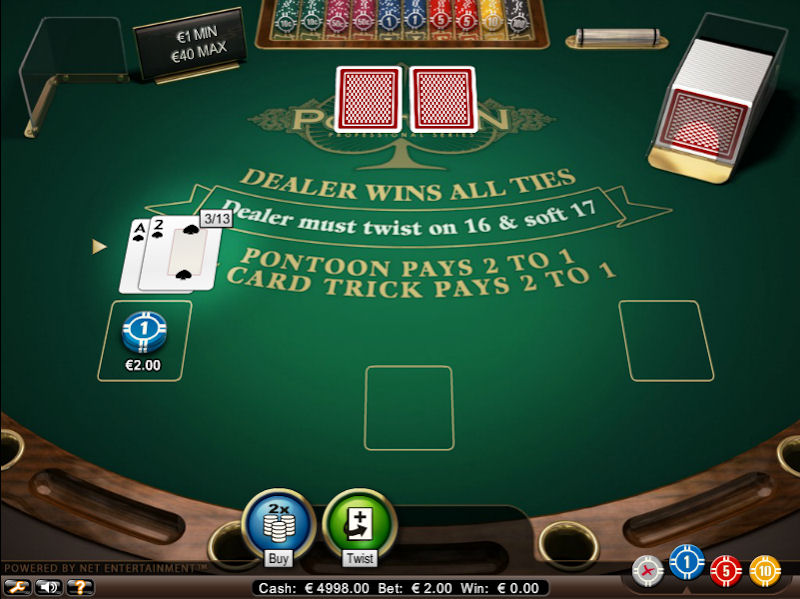 Pontoon is a lesser-spotted Blackjack variant seen at online casinos, but British players (like us) who may have grown up with with this game will be delighted to find NetEnt has created a rather good version that can be tracked down at an increasing number of sites.

This online Pontoon is presented with the usual attention to detail we’ve come to expect from NetEnt, with sound and graphics that create that authentic feel of playing real cards at a real table. The game is played with six standard decks, and offers table limits between £1 and £40 per hand plus the player can choose to play up to three hands per game.

Pontoon differs from traditional Blackjack in a number of ways, and perhaps most significantly in that both the cards in the Dealer’s hand are dealt blind (i.e. face down). The terminology of play is also changed, so expect to ‘twist’ rather than ‘hit’ and ‘stick’ to ‘stand’ in this game, and an initial hand of 21 is a Pontoon rather than Blackjack!

Player Rule obliges the player to twist any hand that is less than 15.

Dealer Rule is shown as ‘twist on 16 and soft 17’ which translates as ‘stand on Hard 17’ in more common Blackjack terms.

Ties are always won by the Dealer, rather than being push bets as with traditional Blackjack.

Splits are allowed on a player’s initial deal if they are two cards of the same value, and one further re-split is allowed with a limit of playing a total of three hands from split decisions.

Buying is similar to doubling down in traditional Blackjack, but in Pontoon the option is available at any point in the player’s turn providing they’re holding four cards or less. After ‘buying’ to double their initial bet, the player is dealt one further card.

The advertised house edge for NetEnt’s Pontoon is advertised as 0.34% (RTP 99.66%) assuming optimal play, which makes it an attractive alternative to other Blackjack variants.

Our youthful memories of playing and loving Pontoon make it easy for us to recommend this online version. However, even without that inbuilt bias we think this is a great game to explore if you’re looking for something a little different from traditional online Blackjack games. The subtle twists (no pun intended) to its rules make for different strategic challenges for the player, marking this out as a game to suit those of you who want to stretch your skills beyond the normal Blackjack boundaries.