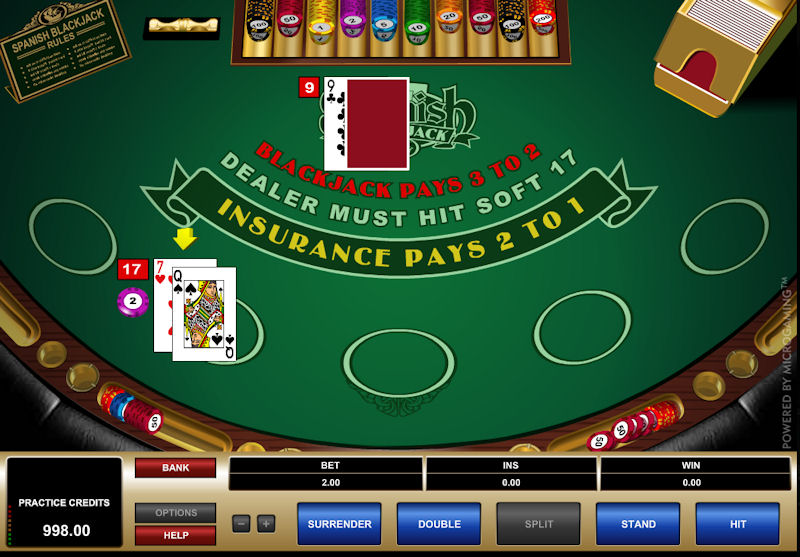 Spanish Blackjack is Microgaming’s title for its popular online Blackjack variant based on the rules of Spanish 21, and played with eight Spanish decks in the table’s virtual shoe. For those of you new to the idea of ‘Spanish’ decks of cards, these are standard decks of 52 playing cards with the 10s removed (but not the picture cards) to create a 48 card deck with a reduced bias towards cards values of ten over other card values.

Beyond this initial quirk in the composition of the deck, the Spanish Blackjack table indicates rather more traditional rules of Blackjack paying at 3 to 2, a Dealer Rule that hits soft 17 and the potential Insurance side bet paying out at 2 to 1. Other reasonably common Blackjack rules that apply to this table are:

Splits are available on any hand of matching card values, so a two-card hand of two different ranking picture cards can also be split. Splitting is possible up to three times per game to create a maximum of four hands from the initial two-card deal.

Doubling down is possible at any time on the player’s hand, including on a split hand. Re-doubling on a hand is also possible once per game.

Late Surrender is possible after the Dealer has peeked their hand to check for Blackjack if it shows an upcard of 10 or Ace. Surrender is also allowed after doubling down.

Where Spanish Blackjack deviates more unusually from common Blackjack rules is in two areas. First a player Blackjack will always win, even against a dealer Blackjack that would normally result in a push bet.

Secondly, Spanish Blackjack has a number of bonus payouts for specific winning hands other than Blackjack, but only if achieved without doubling the initial deal. In more detail, these are:

As you can see Spanish Blackjack offers a much greater diversity of payouts compared to traditional Blackjack games, and its Spanish decks also create a new strategy to learn if you’re aiming to get close to the leanest theoretical house edge of 0.4% for this game (99.60% RTP).

Whether you’re up for the challenge of learning a new Blackjack strategy to squeeze the best from Spanish Blackjack is a matter for you to decide, but we we very much like the differences this variant provides. With its extra bonus payouts and the wider freedoms to split and double down it offers over more common European Blackjack games, we say ‘Y Viva España!’