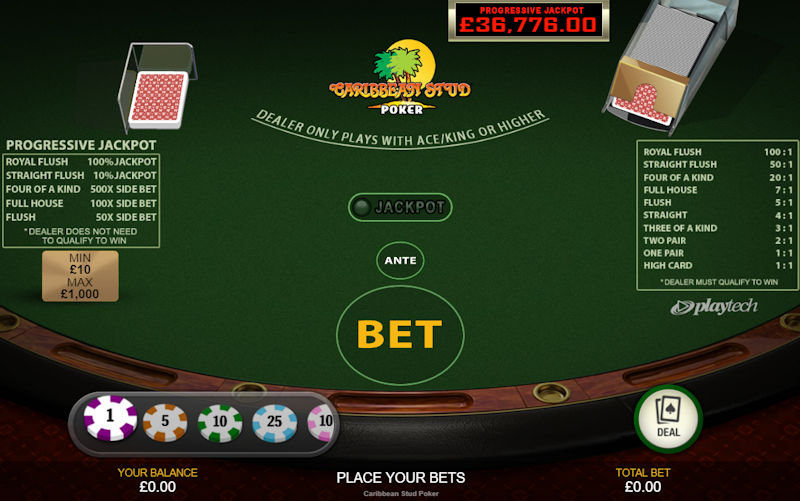 Believed to have been invented in the early 1980s, the game that has become to be known universally as Caribbean Stud Poker is a casino variant of the traditional five-card stud poker game. It’s not often seen in online casinos, but Playtech created on online version of the game many years back and continues to update that to offer it with operators who license its software.

Playtech’s Caribbean Stud Poker game is neatly presented with what’s now become a traditional look for online table games, with the player’s point-of-view being as if sat at a real-world table complete with virtual wood and leather rail and the layout presented on deep green baize.

Virtual chips allow you to stake as you desire, with a rather pleasing animation of the chips vaulting from the rack onto the layout when you place them. We’re also delighted to report that Playtech has also avoided adding any background music to play, something that routinely blights some rival online casino poker games in our reviewing experience.

Play itself is nicely executed with rapid deals allowing for quick play, although there is also a Turbo mode if that’s still not quick enough for you. There is a feeling though that Playtech could have gone a little further with the graphics to make the experience a little closer to playing a real-world table.

In particular the use of correct perspective for the cards lying on the table and indeed the paytable guides shown to the left and right of the player position would add just a touch more realism. We’ve seen this done on rival developer’s table games and we’re fans of the extra je ne sais quoi it adds.

We can’t quite put our finger on it, but Playtech’s Caribbean Stud Poker feels a little old hat now, especially when faced with competition from other online table games based on tournament pokers like Texas Hold’em. It’s still an entertaining game in many ways, and if your preferred online casino is powered by Playtech it’s worth a look, but we doubt it would rate as many players’ go-to game.

Yes, it plays well on mobile devices but we feel there are plenty of casino poker games out there that feel a little more like a ‘real deal’ in a club, and we must declare our preference for playing online games that can give as authentic an experience of real-world table gaming as is currently possible with our digital devices. Close, but no cigar.