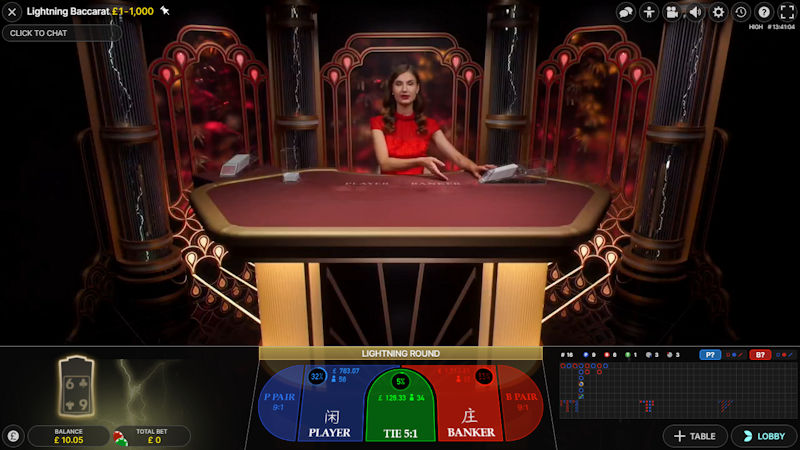 One of the neat developments being explored in the world of live online casino gaming is the opportunity to create enhanced versions of familiar table games that extend the potential for big wins beyond a game’s traditional format. Side bets have been the usual tool for achieving bigger wins than the core game can offer, but with its Live Lightning Baccarat, Evolution Gaming offers an intriguing way to boost your results from a winning Player, Banker or Tie bet.

Evolution Gaming has established a formidable reputation for its live casino software, and Live Lightning Baccarat is no exception. The live component uses cutting edge tech to ensure a reliable, high-resolution broadcast of the real-world events at the table in Evolution’s studio, whilst slickly designed user controls give you all the tools you need to play the game and study the historical data – the famous ‘road’ maps beloved of keen Baccarat players – whether you’re playing from a desktop PC or mobile device. The studio presentation is highly professional, edging towards a gameshow-style feel rather than recreating the ambience of a club table, but without being too brash and distracting. It works for us!

So what makes this particular Baccarat table special? Well, the Lightning strike is the electric potential of between one and five ‘Lightning Cards’ being drawn per game that can radically energise any winning bet. Those Lightning Cards are virtual, RNG generated instances (as opposed to being drawn by the dealer from the game’s real deck), and each signals a candidate card with its own multiplier value of between 2x and 8x.

Should you win your bet on a hand that features one or more cards that match that game’s Lightning Cards, then its payout will be boosted by the relevant multiplier. Better yet, multiple Lightning Cards in that hand will work to multiply each other so, for example, a winning hand featuring two 8x multipliers will escalate the usual pay by 64x. Do the maths and you’ll see the ultimate theoretical result would be a Tie Bet benefiting from five Lightning Cards all showing 8x multipliers – that would pay out a staggering 262,144 times your stake by our calculation!

The only downside to note about Live Lightning Baccarat is that the increased payout potential from the Lightning Cards does have a price. A 20% surcharge, or Lightning Fee as Evolution call it, is added to your total bet to cover the additional cost of paying out these enhanced wins.

Live Lightning Baccarat is an interesting development of traditional Baccarat, which may well tempt you if the buzz of casino play is holding out for the rarer but bigger wins. The Lightning Fee at this table will mean the majority of wins will actually be paying back less than you’d win at a standard Baccarat game, but that is balanced by the chance a Lightning Card will bless occasional wins with far richer results.

If higher volatility table gaming suits your mood, then it strikes us that Lightning Baccarat could well be a shockingly good choice for you to seek out.