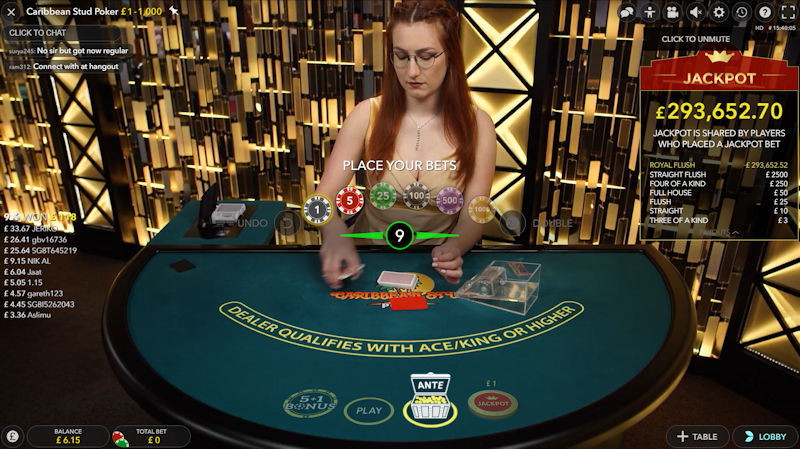 Evolution Gaming’s hard-won status as one of the premier software platforms for Live Dealer casinos has also given it considerable clout with respect to getting strategic partnerships. For instance, it has unlocked the rights for it to create ‘live’ versions of Scientific Games’ 3 Card Poker and Ultimate Texas Hold’em formats, and – pertinent to this review – Games Marketing’s popular Caribbean Stud Poker. This casino version of five-card stud poker was created in the 1980s, and the game has won a lot of fans since that time, offering another choice for card players seeking casino entertainment that rewards some strategic play.

Evolution Gaming’s Live Caribbean Stud is a faithful recreation of the original real-world game, melding live-streamed deals from the authentic gaming tables in its Riga studios with a highly intuitive user interface for the player to make their bets and calls. The feeling of playing in a real-world club is very convincing, with the whole package running exceptionally smoothly on both desktop and mobile devices during our review.

In addition to the core bets on the five-card poker battle between player and dealer that is central to this game, Live Caribbean Stud Poker offers some side bet action too. Universally you’ll find the 5+1 Bonus Bet option (working the player’s hand and Dealer’s upcard to get a hand ranking Three-of-a-Kind or better to win), but you may also find that the licensing online casino has the Progressive Jackpot option activated too.

This focuses purely on the Player’s final hand rank ranking as Three-of-a-Kind or better, and drops the escalating Progressive Jackpot if it makes the top rank of a Royal Flush. A nice little earner if have this option and you pull off that pay!

Whilst casino pokers such as 3 Card Poker, and Ultimate Texas Hold’em have got a lot of attention in recent years, we have a personal preference for Caribbean Stud when it comes to this category of game. The reason? Simple. It maintains the interest of using basic poker rules to inform its gameplay, and with use of basic strategy you can expect to enjoy the game with the theoretical long term RTP of 98.19%. That figure is notably better than other two casino pokers mentioned above, and competitive with many Live Blackjack games too. That makes it well worth investigating if lean house edges matter to you (which they should in our opinion), and the challenge of applying a bit of strategic play to get that advantage is part of the buzz you’re after.

We like this game, and finding an online casino using Evolution Gaming’s Live Dealer platform is the only way to experience the ‘real deal’ with your digital devices.