Age of the Gods King of Olympus Slot

Age of the Gods King of Olympus Slot Review 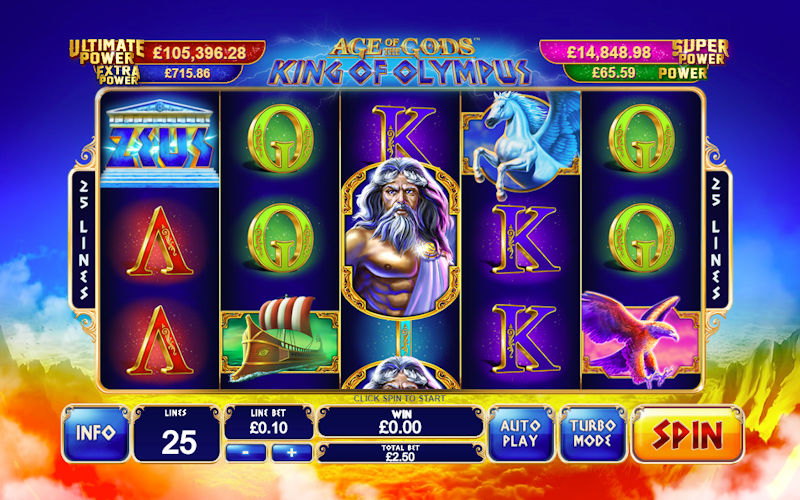 Like its two companion slots in the Age of the Gods series, King of Olympus is built on a theme of Ancient Greek mythology, with some classic video slot features and access to the randomly triggered Age of the Gods Mystery Progressive Jackpot.

Whereas the two other Age of the Gods’ slots had twenty payline basegames, King of Olympus ups this to twenty-five. With all of these paylines permanently active, the minimum bet per spin is a very reasonable £0.25 but super high rollers can dial in up to £100 per line, so if you’re as rich as Croesus you could wager a whopping £2,500 per game! In many ways, King of Olympus is the simplest of the three Age of the Gods slots, with fewer headline features.

For the basegame, Zeus himself serves as the Wild and the highest paying symbol, landing 3000x your linebet should he appear five times on a payline. The Temple of Zeus is the only symbol Zeus cannot substitute for in his Wild role, since this is the basegame’s Scatter, which not only pays when two or more are in view but also triggers this slot’s free spins feature when three or more are present following a spin.

The King of Olympus slot simplifies its free spins feature into a single event beginning with the gift of ten free games. These cannot be retriggered, however they are augmented for bigger wins in a couple of ways. First the mighty Zeus appears as a locked Wild on the centre position of the middle reel.

Secondly, a multiplier is applied to all wins during these free games. This multiplier starts at x2 (so doubling any wins), but increases by one every two spins meaning any wins in the final two spins will be paid at five times the standard win!

Mentioned as the beginning of this review, King of Olympus is yet another gateway to Playtech’s Age of the Gods Mystery Progressive Jackpot game. This is an entirely random reward, so can trigger on any spin regardless of your stake or result on that game.

One of four tiers of Mystery Progressive Jackpot is a guaranteed win, revealed through playing a Match 3 game, with the Ultimate Power level delivering the Olympian bonus that is built progressively from a starting point of £100,000.

Of all the three Age of the Gods slots, King of Olympus is perhaps the least thrilling. With fewer features it’s potentially less engaging over long sessions and return visits, however it does offer simple video slot pleasures and the possibility of a progressive jackpot triumph, which is what plenty of players love about it.

Players absolutely new to online slot gaming will probably like King of Olympus as a good introduction to the Age of the Gods series, but for us our pick of the three titles would probably be the Furious Four variant for a more fittingly epic experience.

Play Age of the Gods King of Olympus Slot