Age of the Gods Slot

Age of the Gods Slot Review 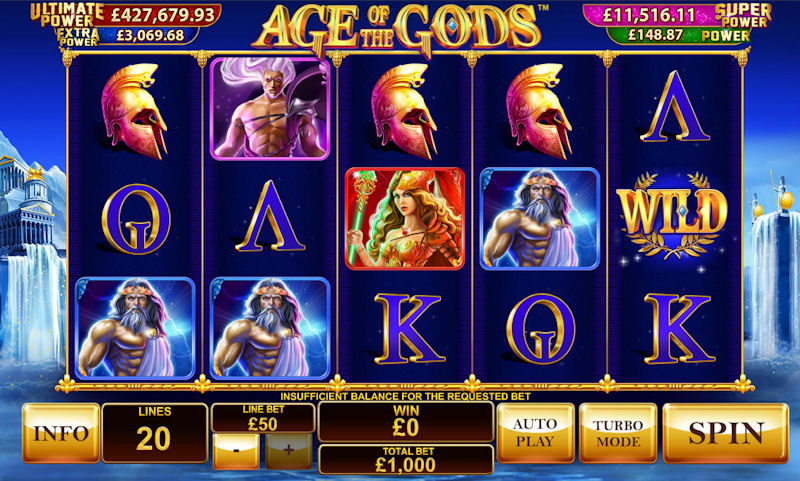 Should you be demanding a deity-driven adventure the next time you go gaming at your favourite online casino, Playtech have summoned up five Greek legends to oversee proceedings on its Age of the Gods slot. With such a lofty title, we anticipate a mighty, powerful slot, so what will luck bring you in the lap of these Gods?

Enter the Age of the Gods slot, and you enter a five reel, twenty-payline kingdom ruled by the divine powers of Athena, Aphrodite, Hercules, Poseidon and the mighty Zeus himself. The payline count is fixed on Age of Gods so bet options are simply based on the linebet you’d like to make, and there’s lots of choices to game with the Gods between a lowly £0.20 and gargantuan £500 per spin (up to £1,000 per spin at Betfair Casino!).

A traditional Wild roams these reels to transform spins to wins where it can substitute for other symbols, with its influence only resisted by the Scatter Bonus symbol. One additional feature of the Age of Gods basegame to note is its Pantheon of Power Feature – this is a gift from the gods of 200x your linebet if all five supreme being symbols (that is Athena, Aphrodite, Hercules, Poseidon and Zeus) combine in any order on a payline. Cheers guys!

The Bonus Scatter mentioned earlier is the true power of Age of Gods slot since three or more of these in view is your entrance to the four heavenly free spin bonus games. Between you and your date with free spins destiny is an interim scratch card style game, where the moment you reveal three matching instances of Athena, Hercules, Poseidon or Zeus determines which god’s grace will be bestowed upon you. But beware the hell of Hades, for three instances appearing first will scupper your plans!

Assuming Hades doesn’t hamper your progress, Athena’s gift is nine free spins with a random multiplier awarded to wins, Zeus brings nine spins with a locked wild, extra wilds and an escalating multiplier, Hercules brings stacked wilds to his nine spins, and Poseidon prods random wilds into play with his trident whilst his nine free spins play out.

What adds to the rich rewards these free rides can bring is that you return at the end to the initial Bonus Screen which is reset so you enjoy another chance to retrigger one of the bonus free games. This is mighty stuff indeed, and brings the tantalising prospect of some very big wins from the Age of the Gods.

One final rapturous surprise this online slot can deliver is its randomly triggered Age of the Gods progressive jackpot. This can occur on any spin, whatever the stake or result, and presents players with a 4×5 grid of symbols concealing one of four prize symbols.

The moment your picks reveal three matching symbols the related progressive prize is won, with the Ultimate Power level the Zeus-like daddy of them all, with a starting threshold of £100,000!

Whilst Age of the Gods is not the most innovative themed slot we’ve played, it’s a very smooth operator and packs a powerful punch of free spin bonus games. May the luck of the Gods be with you!

Click ‘Play Slot’ for the best Age of the Gods Slot online casino.

Play Age of the Gods Slot