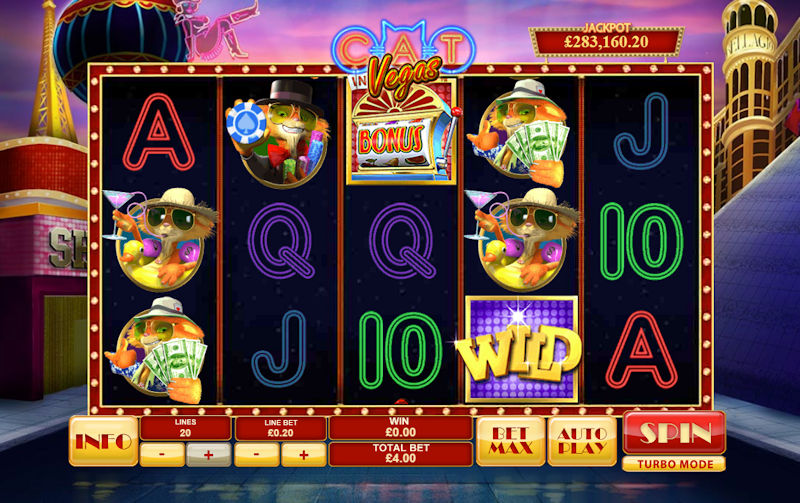 In the race by developers to create new online slots to tempt players away from the established favourites, strange themes are often deployed to breathe new life into games built on classic sets of basegame and bonus features. And so it is that Playtech have mashed up two broad themes in an attempt to broaden the appeal of its Cat In Vegas slot.

Like animal themed slots? Cat in Vegas is the adventures of Felix the Cat! Love the showbiz and glitz of Vegas night life? Felix is looking to scratch up a litter tray of loot in the playground of Las Vegas! It’s a curious concept when all’s told, but let’s explore what feline fun Cat in Vegas really has to offer.

All online slot fun starts with a solid basegame, and Cat In Vegas has a purr-fectly (sorry, we couldn’t resist the terrible pun) entertaining five-reel, twenty payline format (or should that be furr-mat? OK, we’ll stop with the puns now).

A decent paytable gives plenty of ways to win big, but online casino cats will be willing five Wilds onto an active payline as that drops a reward of 10000 times the linebet into your lap.

As you would expect from an online slot Wild, this symbol also has the power to substitute for all but three of the other symbols on the reels to turn more spins into wins wherever its transformative powers can work their magic.

First our of the Cat In Vegas bonus bag is the Wheel of Luck Bonus, which triggers when its related Scatter Symbol is seen in view on reel three of the basegame. A relatively simple Wheel-of-Fortune style game, this lets Felix spin the Wheel of Luck to win one of the multipliers on its rim.

Once won, that multiplier figure is dimmed on the Wheel and Felix can spin again – in this way tasty big bonuses can build as more multipliers are added, up until the wheel lands on a previously won (and now dimmed) prize which ends the round.

The second bonus game to play for is the King Show Free Games, where your ticket in is three of the King Show Scatters spinning into view on reels two, four and five of the main game.

As the name hints at, this is a freespins feature dressed up with a bit of Elvis-style showmanship; a gyrating feline Elvis-impersonator hip sways Sticky Wilds onto the freespin reels while stagefront thunderpots blast freespin values to the top of screen.

At the conclusion of this short ‘show’ the accumulated free spins are played out with the Sticky Wilds awarded ramping up the potential wins you’ll ‘leave the building’ with. Pretty entertaining stuff and we netted a very decent bonus when we got an audience with the King during our review.

The final bonus feature that Cat In Vegas brings to town is its Vegas Slots Bonus, where a progressive jackpot prize awaits a lucky punter.

Launched with the Bonus Scatter showing up on reels one, three and five, Felix gets the chance to spin four Vegas slots to destruction, aiming to pocket one of four progressive pots before he breaks every single one-armed bandit he gets his paws on!

Cat In Vegas’s RTP figure of 92% marks it out as less competitive on that score than many other twenty payline slots, however viewed simply as an entertaining online slot with a progressive jackpot amongst its treats we reckon it’s the cat’s pyjamas.