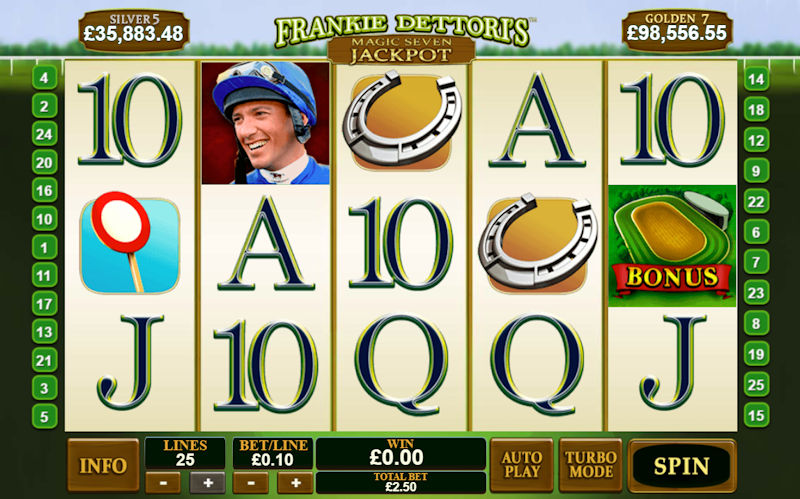 Frankie Dettori is undoubtedly one of the true legends of horse racing, his prowess in the saddle leading him to pulling off one of the greatest successes ever witnessed in the sport – the day Frankie brought home seven winners in a single day at the Ascot Races in 1996! This feat is the obvious inspiration for Playtech’s Frankie Dettori’s Magic 7 slot, which challenges all champion slot jockeys to romp across its reels in pursuit of a magnificent 7777x jackpot.

The basegame of Frankie Dettori’s Magic 7 luckily doesn’t require any horse-racing skills, since it’s a familiar five-reel, twenty-five payline video slot format with all the classic trimmings to satisfy any slot fan.

With good reason Frankie himself puts in an appearance as the most valued symbol riding these reels, not only being the way to win the 7777x jackpot when five Frankie’s photo-finish on an active payline but also functioning as a Wild that can substitute for all symbols bar this online slot’s two Bonus Scatters.

These Scatters are your pass to the bonus enclosures of the Free Games Race and the Magic Seven Bonus, and only need to be in view on the reels rather than lined up on paylines to be in contention.

Somewhat counter-intuitively it’s the Scatter Symbol that says ‘Magic Seven’ on it that triggers the Free Games Race when three or more are in view, but that won’t matter a jot when you enjoy the rewards this feature can bring.

A second-screen game invites you to back one of three horses, and reap a fistful of freespins on their final placing in an animated final furlong. Third place wins ten spins, second fifteen, and, if the spirit of Frankie is riding with you, first place wins a tasty thirty-five romps back on this online slot’s reels.

Ride the Bonus Scatter onto reels one and five of this Frankie Dettori slot and you’re whisked to the rails of a virtual track split into twenty furlongs. Under starter’s orders it’s your mission to pick as many of the sectors as you can to reveal trophies that earn you increasing multipliers and treat you to a video of one of Frankie’s famous wins.

The race is over once a ‘Collect’ symbol is revealed, and the final banked multiplier applied to your stake as your final prize money.

For those who love a flutter, this online slot has one more little treat to tempt you – a ‘gamble’ feature on its basegame. This is entirely optional, and up for grabs when you hit a winning combination on the five reels.

Hitting the Gamble button at this stage will open a second-screen feature, where you can opt to gamble all or half those winnings on a simple hi-lo card bet, with four blind cards to choose from.

Get it right and your chosen gamble is doubled, with the option to gamble again offered; get it wrong and it’s back to the reels with you empty (of half-empty) handed!

Whether you’re a fan of the gee-gees or not, Frankie Detorri’s Magic 7 is an online slot any player should relish and it really deserves its reputation as a thoroughbred game backed by the best online casinos.