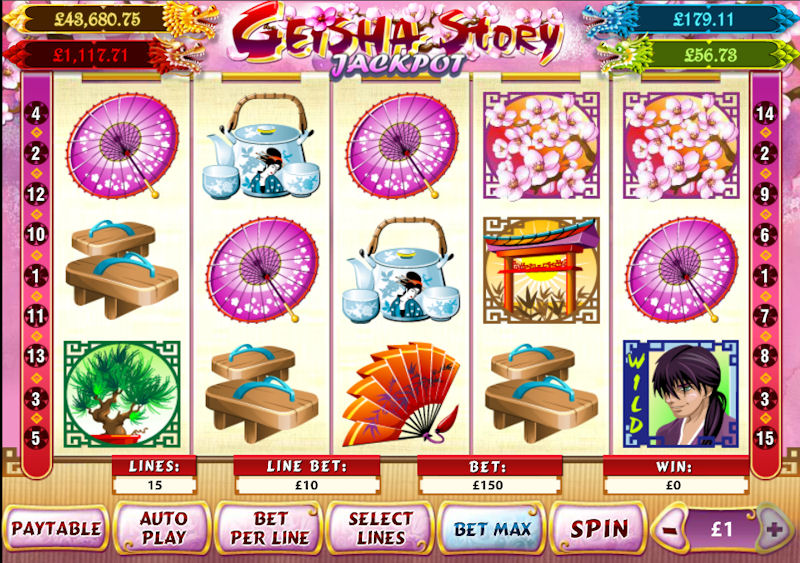 Oriental-themed slots have proven to be quite a popular emerging genre with online slot players, and Playtech’s Geisha Story joins their ranks with a tale focused on a love story between a Japanese warrior and a coy Geisha who’s caught his eye . . . at least that’s what we can fathom from the somewhat clunky intro animation to this slot’s basegame.

Moving beyond the rather naff intro movie to Geisha Story (and we were quickly mashing the Skip Intro button on all subsequent sessions on this game) you’ll find a standard fifteen-payline video slot format, with reels festooned with Lotus blossom, bonsai trees, Japanese tea sets and other such iconic (although potentially clichéd) symbols of traditional Japanese culture.

Our love-struck warrior has not only a wild look in his eye, but a Wild nature to his symbol too with the power to substitute for all but the Geisha Bonus symbol and this slot’s Scatter symbol, a wise old man who also ranks as one of the most poorly executed characters we’ve seen on a slot!

It looks like someone in Playtech’s art department had the afternoon off and got their five-year old child to fill in for them. Anyway, returning to matters gaming, the Wild warrior also ranks as the highest paying symbol on the paytable, returning a not inconsiderable 10,000x your stake if he lines up five times on a payline.

Perhaps the true Geisha Story of this themed slot lies with its free-spins bonus feature, for which the Geisha symbol is the key. Found only on the first and last reels of the basegame, if she is seen peeking coyly at you from both at the end of the spin, then it heralds a quick trip into her Geisha Garden to harvest your reward.

Here an array of six fans conceals between four and twenty free spins, followed by a player pick from a further six fans that hide multipliers between 2x and 7x. From this interim round you finally enter the free spins feature armed with the spin count and multiplier picked to enjoy the fruits of those choices.

Adding to the potential these free spins will lavish large winnings on you, the Bonus symbol stays in play on the reels hence infinite retriggers are possible.

The final feature of note is one players of other Playtech oriental slots such as Fei Cui Gong Zhu and Nian Nian You Yu will instantly recognize; the Dragon Mystery Progressive Jackpot.

Randomly triggered following any spin, this is a separate Wheel-of-Fortune style game that guarantees the player one of four progressive jackpots, with the top-tier Golden Dragon jackpot being a very tasty prospect indeed.

In truth, Geisha Story is not an especially distinctive game and as mentioned earlier has some production details that are, quite frankly, pretty shoddy in our opinion.

However, the underlying mechanics of this online slot are solid and its free spins feature can deliver some pretty pleasing wins if luck brings the eponymous Geisha to reels one and five to grant you access to her Geisha Garden Bonus.