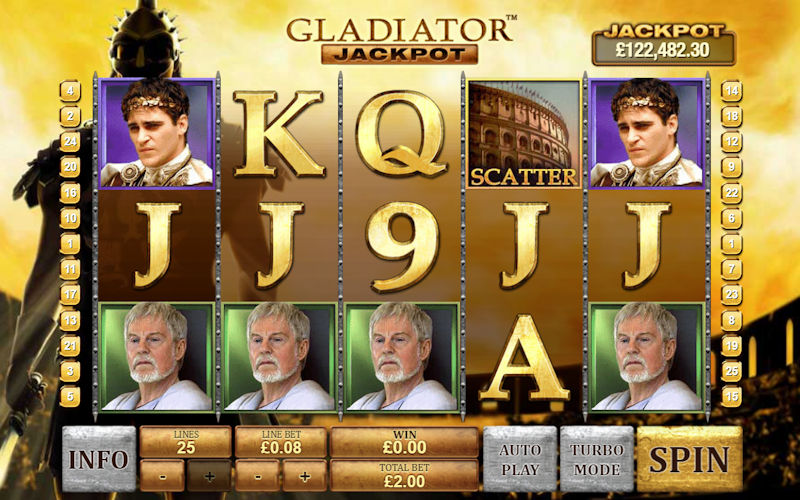 Playtech’s Gladiator slot has been on the online casino scene for quite some time now and it seems it remains a popular choice with slot fans despite the film that inspired it being over fifteen years old now – how time flies when you’re having gladiatorial fun!

Gladiator Jackpot is a spin-off machine from that original stalwart video slot that adds – you may have already guessed – a progressive jackpot to the action, giving Marcus Aurelius the muscle to make the odd player a millionaire.

Playtech have clearly decided to observe the famous maxim ‘if it ain’t broke, don’t fix it’, so Gladiator Jackpot doesn’t substantially deviate from the gaming recipe that made the original Gladiator the hit online slot it was, and indeed still is.

The core arena for your gladiatorial combat on this slot is the five reels and twenty-five paylines of the basegame, making liberal use of characters from the film as symbols, although curiously not gladiator Marcus Aurelius himself – maybe someone at Playtech doesn’t like Russell Crowe’s poetry either! Anyway it’s all stirring stuff, enlivened by short clips from the film animating certain symbols in an entertaining way whenever they form a winning combination.

The relative age of the Gladiator slot perhaps shows in its bonus features which seem less exotic in comparison with the latest innovations in the online slot world.

That said this game’s Coliseum Bonus and Gladiator Bonus Scatter symbols do trigger perfectly entertaining second-screen bonus games, the Coliseum Bonus giving players the opportunity to assemble a cohort of free spins, with bonus multipliers, extra Scatters and Wilds applied, that can transform a single spin into a torrent of cash prizes.

The Gladiator Bonus is a simpler random pick of nine gladiator helmets from a choice of gold, silver and bronze, and it’s here that the progressive jackpot can be won.

Nine gold helmets is the key to your financial freedom here, as this will be the sign that the progressive prize is yours! Fantastic as it is to now have a progressive jackpot available on this popular online slot, we think Playtech could have made the effort to add this feature with some new bonus game to freshen things up a bit – you know, perhaps something with some proper bloody, gladiatorial combat to live up to the theme? There’s not even so much as a Christian getting thrown to a lion to add to the drama.

As a progressive jackpot slot Gladiator Jackpot is a perfectly solid offering, but we are a bit disappointed that Playtech haven’t used the opportunity to bring a new spin to this game so it complements the original Gladiator slot with some distinctive new ideas.

We’d love to have discovered this version had new bonus rounds dripping with authentic Roman roughhousing not simply a progressive bolted on to an existing feature.

That said, it’s also patently clear to us from the healthy rate at which Gladiator Jackpot ramps up its progressive prize that there is a vast legion of players who love this online slot just the way it is and have sworn loyal allegiance to it!