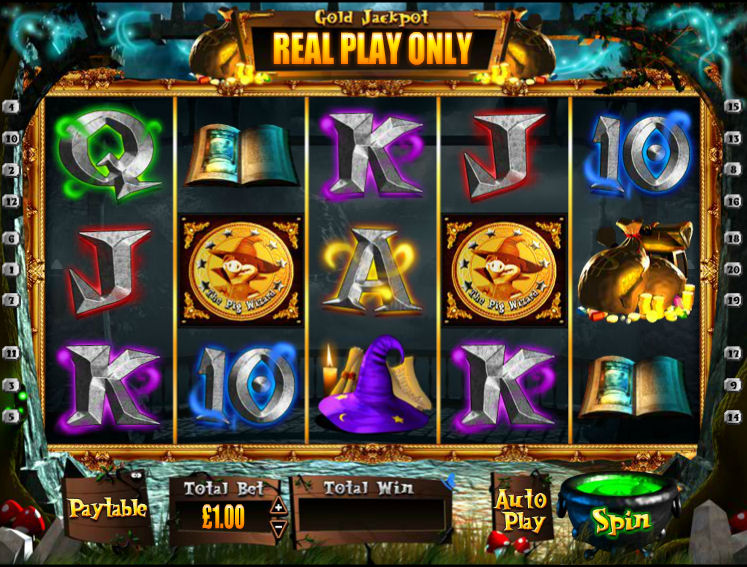 A slot that quickly weaved its magic amongst slot players in UK arcades and betting shops, Harry Trotter has effortlessly transitioned to the online slot market and is proving it’s not a pig in a poke if you’ve never spun its reels before.

Naturally the basegame of The Pig Wizard slot takes its thematic cue from the awkward pun that makes Harry Trotter a porcine colleague of one Harry Potter, so it’s all wizardry, spells and potions in evidence. Quite what J K Rowling (and more importantly her legal team) make of this cheeky, porky pastiche we don’t know, but it is damn good fun and the five-reels and twenty paylines deliver a crackling slots experience.

Adding a suitably magic element to proceedings, the usual Wild symbol common to video slots is augmented on The Pig Wizard with its Magical Wild Reels Feature. This is an entirely randomly triggered feature in which Harry Trotter himself flies onscreen to zap up to four reels with his wand, transforming them into wholly wild reels with obvious potential to summon up more wins from the paytable.

The other Symbol players will be keeping a sharp eye out for is the Harry Trotter Bonus symbol on reels one, three and five. Operating as a Scatter, three of these symbols in view is the alchemy to unfurl the hidden Magical Map Bonus.

This in itself is not actually a bonus game, but merely the portal to four different bonus features which a player can freely choose from. It may also trigger The Pig Wizard’s Progressive Jackpot, so access to the Map is not only your route to this online slot’s bonus games but could also invoke the mightiest of jackpots.

Should you access the Magic Map we’d humbly suggest that you give the Bonus Cash Prize option a miss since, whilst it does deliver a nice mystery cash prize there’s simply no magic to it. The other three features all deliver a little more wizardry with their wins – ‘Magic Mirror Spins’ is a free spins round with enriched reels and the Magic Mirror symbol to ramp up the wins from spins, ‘Squeal or no Squeal’ a cheeky homage to Deal or no Deal with books of spells in place of the famous red boxes, and rounding off the trio is our personal favourite, Trail of Magic.

This last game is a lapper board style game where players get to progress Harry Trotter around the board with virtual dice rolls picking up multipliers, crystal ball bonuses and potions, while hoping to avoid the phials of green brew that will turn Harry from pig to frog and end the game. Great fun with rich pickings!

Harry Trotter The Pig Wizard is a truly great combination of classic video slot entertainment with an inventive set of bonus features that play to the game’s comic theme. The fact this already generously featured machine packs in a meaty progressive jackpot too makes it a game we reckon we’ll see ranking highly amongst the best online slots for some time to come. Wizard stuff.