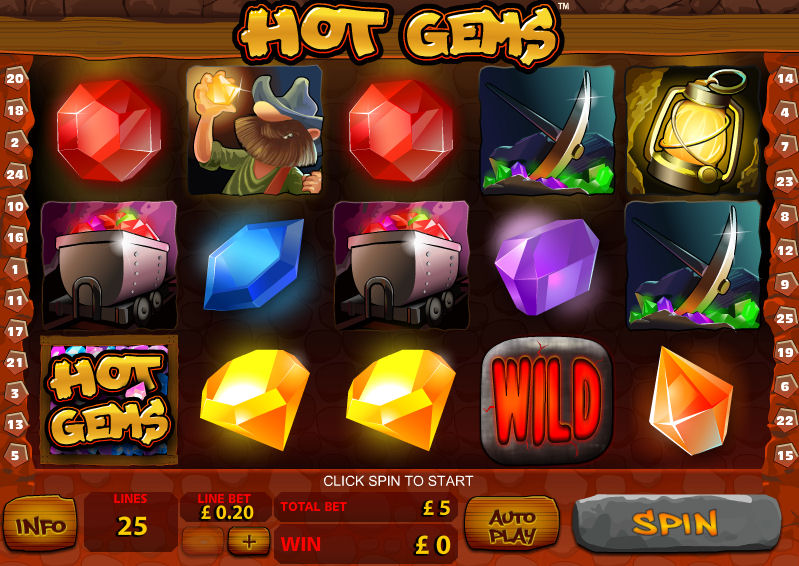 After a few quick games of this jewel mining themed online slot it became very apparent to us that Hot Gems is Playtech’s response to the phenomenal success of NetEnt’s Gonzo’s Quest. That’s no bad thing, since Gonzo’s Quest remains one of the best online slots we’ve played and not every online casino has it, so finding a slot that has similar qualities widens the field. So what does Hot Gems do that gives us the same warm glow as Gonzo?

First, it’s worth mentioning that Hot Gems also introduces its basegame with an optional animated sequence setting the background for the game’s theme. Our comic little gem miner is toiling away in his mine, before hitting a rich seam of gems that carry him on a cascading flow or precious stones out into the daylight.

It’s all good fun, beautifully animated and sets the tone for what follow. And what follows is a five reel, twenty-five payline basegame, with its symbols a striking selection of suitably hot-looking gemstones and specific feature icons. Also fundamental to Hot Gems slot is its Collapsing Reels mechanism.

This is Playtech’s take on the Avalanche Reels concept in Gonzo’s Quest, which itself was a lift of the Tumbling Reels pioneered in IGT’s Da Vinci Diamonds slot. If you’ve never experienced this kind of slot mechanism then, believe us, it is truly a gem.

The essence of it is that symbols tumble into position rather than rotate on traditional reels, and where a winning combination falls onto a payline, that result is paid after which those symbols disintegrate and the symbols above tumble down filling the gaps. In this way, chain reactions of wins can occur and the whole effect is a winner in every sense of the word!

Hot Gems slot is enhanced with classic video slot features like a Wild and Scatter symbol, plus a free spins bonus feature triggered if you see three instances of the Free Games symbol tumble into view on reels 1,3, and 5. The free spins bonus is a gift of fifteen free spins and – in a further parallel with Gonzo’s Quest – if features a special multiplier mechanism.

Starting at x1 it notches up one value for each step in a consecutive chain reaction of wins up to a maximum value of x5. That means the second win in a chain reaction will be doubled, the third tripled and so on. This is a fantastic feature, and makes a hot streak in the free spins feature a way to mine some massive rewards from Hot Gems.

We’re big fans of the cascading reel mechanisms of Gonzo’s Quest and Da Vinci Diamonds, so Hot Gem’s Collapsing Reels instantly helped it shine through as a sparkling slot.

Although its theme is distinctively different from Gonzo’s, Hot Gems’ gaming experience has many of the same facets that made GQ such a hot slot, so we suspect it will be equally irresistible to reel enthusiasts looking to mine some magic at Playtech-powered casinos.