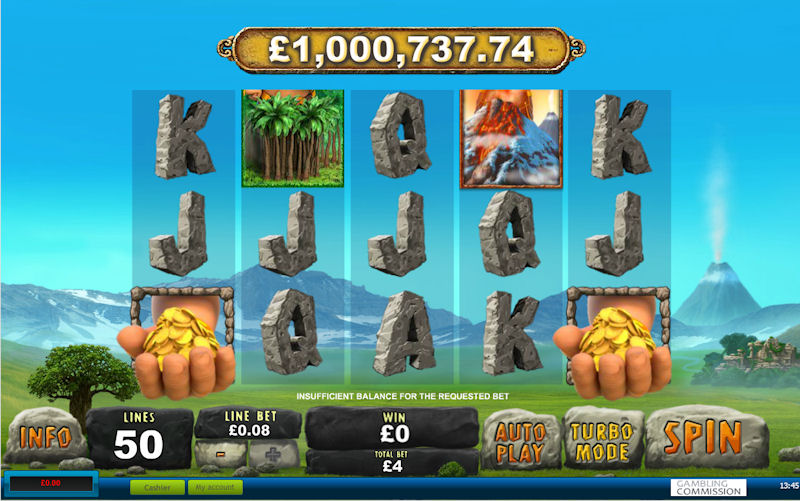 Playtech has earned itself a fearsome reputation in the world of online slots. A true giant in online casino gaming, it is behind some of the most sought after video slots and progressive jackpots, so its Jackpot Giant comes with quite a pedigree to live up to.

With expectations set high, Jackpot Giant doesn’t disappoint from a point of view of production values. It looks great fun from the start and has a neat clean presentation that we found oddly calming – maybe it’s the pastoral vista looking towards the gently smoking volcano range in the distance, or the ambient soundtrack of bird song but – whatever it is – it was rather nice place to spend some time! Anyway, the genial atmosphere aside, the basegame of Jackpot Giant is classic video slot stuff.

Five-reels and fifty paylines set the scene, with a Wild symbol in play to substitute for all other symbols other than a Scatter and Bonus Scatter symbols.

The generous Giant also makes an appearance as two ‘stacked’ symbols on the reels to increase your chances of knitting together a winning combinations across the myriad paylines this online slot has engaged.

With an excellent basegame we’d rather hoped Jackpot Giant might be a ‘big man’ when it came to bonus features, but this is just not the case.

If you judge an online slot by its bonus features then we suspect you’ll regard this Giant as a bit of a weakling, since there are no freespins and its sole second-screen Giant Bonus game is a bit uninspired in our opinion.

For the record, the Giant Bonus game whisks you to the range of volcanoes that frame the Giant’s land where you are invited to simply pick three of the seething cones, forcing them to erupt pyroclastic plumes of cash for you to bank. Very pretty to watch we grant you, but a little old hat in terms of online slot bonus features.

OK, so Jackpot Giant is not going to set the online slot world alight with its Giant Bonus feature, but that might be missing the point as to why this game is proving such a hit with a massive community of online players, because what is undeniably giant about this themed slot is its progressive jackpot prize.

Most players are going to salivate at the 50,000 multiplier of their line bet a string of five Wilds on an active payline will earn them, but if those five Wilds line up on the central payline (number one out of the fifty) then hold on to your hats because a whole mountain of money is going to rain down!

At the time of this review the Giant was hoarding an eye-watering £3.3 million pound prize that that was escalating upwards pretty rapidly clearly demonstrating just how poplar this gargantuan themed slot is.

For any player seeking the very biggest progressive jackpot games, Jackpot Giant is simply a no-brainer. If biggest is best, this is indeed a Giant amongst men, however if you simply seek a decent video slot with the focus on a rock-solid basegame rather than multiple exotic bonus features, we think you’ll make good friends with this gentle Giant too.