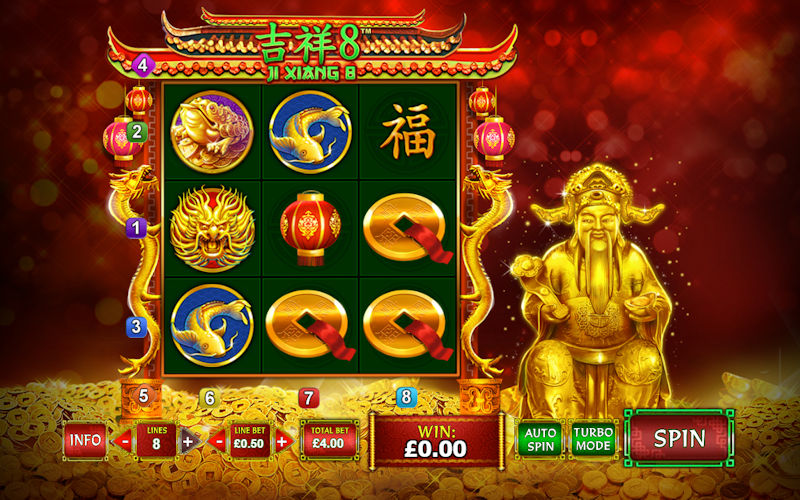 The number eight is considered a very lucky number in Chinese culture. We Westerners might think seven is the magic number, but the Chinese like to go one better, and Playtech have really gone for the lucky jugular with its Chinese-themed Ji Xiang 8 slot. Translating as ‘Lucky 8’ there’s no doubt about the direction this slot is going in so let’s dive in to see how we rate the ‘8’.

The first noticeable difference with Ji Xiang 8 compared to Playtech’s other Chinese-themed slots is that this looks like a three-reeler rather than the more common five-reel format. We say ‘looks like’, for the first surprise this slot throws at you is that each symbol position is in fact a reel in its own right, so in effect Ji Xiang 8 spins nine reels in each game. OK, nine reels doesn’t reflect the magic number this slot’s theme hangs on, but you’ll find a lot of ‘8’ elsewhere in this game, as we’ll explain.

First, there are eight paylines across the 3×3 array of reels and wins are achieved if three matching Chinese-themed symbols line up on any row, any column or any of the two diagonals. Interestingly all pays end in ‘8’ too, so the smallest win is 18 times the linebet, and the maximum is a very lucky 8888 times the linebet.

The Lucky 8 symbol itself is the only special feature of Ji Xiang 8 slot, and is a classic Scatter. Two or more instances only need to be in view to trigger a pay, and with the maximum of nine in view that will land a win of 8888 times the total stake (not linebet), creating the biggest payout possible from this machine.

So is the Scatter truly the only special feature of this slot? No Wilds? No free spins? Yes, yes and yes. Which may make this either the perfect slot for you, or like Kryptonite to Superman. Ji Xiang 8 is exceptionally simple and harks back to a simpler age of casino machines, which isn’t without its appeal.

You spin and you hopefully win. Nothing else to consider; no bonus features to wait around for. And after a few plays of this slot, we have to say that formula seems to work well for Ji Xiang 8.

Whether that’s because it looks like a simple three-reel slot and so our expectation is of the uncomplicated rules those machines typically follow we can’t honestly say, but we found it rather rewarding to play and far more so than the simplest five-reel slots we’ve tried. Go figure, but for now the figure 8 seems to have worked its magic on this Playtech slot and it’s well worth having a few spins sometime to see if its simple charms will woo you to stay up all night to get lucky.