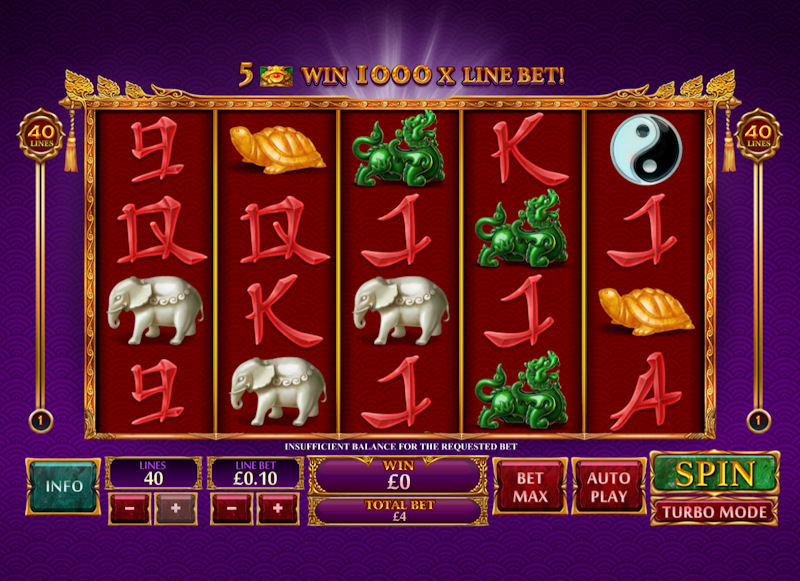 Before you ask – no – we’ve no idea what Jin Qian Wa translates into English as, and a quick Google left us none the wiser too, but we assume it’s something pleasant and / or lucky since it graces another Chinese-themed slot from Playtech. So, whilst the name of this slot is a mystery to us, its theme is loud and clear and firmly presents a ‘traditional’ interpretation of what is quintessentially Chinese to Western players.

The Jin Qian Wa slot is built on a basegame of five reels with forty paylines traversing them. Betting options are exceptionally wide, with players able to spin for as little as £0.01 up to a very, very extravagant £2000. We hear legend of the Chinese appetite for gambling, but a willingness to drop two grand on a single spin is quite amazing – we guess the economic boom in China has created a lot of people with serious spare income!

Returning to Jin Qian Wa’s reels, a Golden Toad with bejewelled eyes and tongue (is this the Jin Qian Wa?) appears as a Stacked Wild, to substitute for all but the Logo Scatter symbol where that will create a win. The Wild also takes the role of the highest-paying symbol on the paytable, with a jackpot of 1000 times the linebet for five instances on an active payline.

For its special feature, Jin Qian Wa sticks with the classic video slot delights of a free spins bonus, triggered when three of the game’s Scatter appear on the three middle reels of the basegame. Eight free spins is the reward here, which may not seem overly generous, however three free spin reels are enriched with more Stacked Wilds and Scatters to both build more opportunities for wins and also retriggers of the feature.

There is no limit as to the number of retriggers possible in this feature, so the initial eight free spins can be extended extensively (and theoretically infinitely) if your luck keeps summoning three Scatters into view.

Jin Qian Wa is another very nicely produced slot from Playtech, and is clearly aimed at extending the range of Chinese-themed slots in its catalogue. However, under its beautiful exterior it doesn’t innovate with features and it’s a rather bread and butter slot in our opinion.

It’s quite possible such classic casino slot mechanics are precisely what the target audience love, but we would have liked to see more imagination for our own tastes . . . oh, and while we’re on the issue of taste, we’ve got to say the soundtrack is one of the blandest bits of Chinese muzak we’ve heard since eating at a Cantonese restaurant in Romford back in 1986. Thank heavens Playtech included a mute option for this.

We certainly wouldn’t put Jin Qian Wa in our top ten games, but we respect that it delivers all the traditional thrills of video slots. If you’re already drawn to Asian or Chinese themed slots and prefer elegant simplicity in the basegame and bonus features offered, this medium volatility game has all those attributes in a very attractive package.