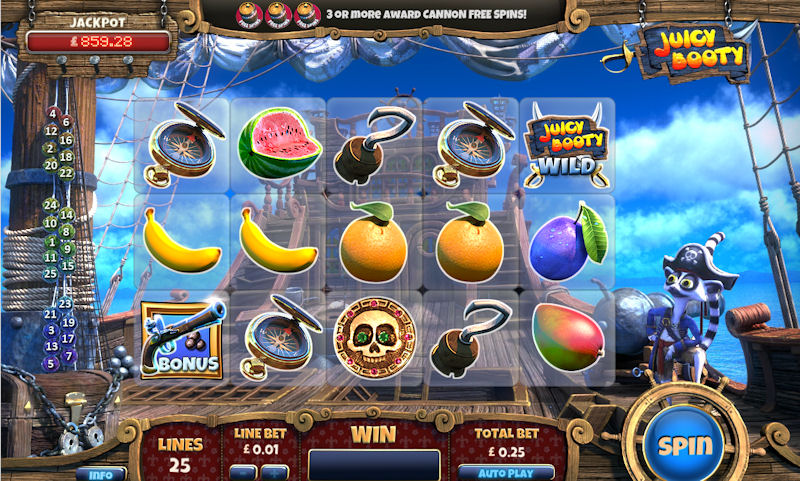 Now before some of you get a little excited about the possibility that Playtech’s Juicy Booty slot is going to be some bootylicious, OG affair, and maybe even the first Kim Kardashian themed slot, stop right there. You can leave such ‘locker room’ thoughts at the door, for this is a literally fruity little number, set on an animal-crewed pirate ship. It’s all juicy fruit and pirate booty me hearties, so let’s board this progressive jackpot slot’s basegame to see what treasure it contains.

Setting sail in a very beautifully rendered setting of the deck of a pirate ship, Juicy Booty’s basegame is a classic five-reel mission with twenty-five fixed paylines as the rigging across them. Flexible betting options lets you spin for between £0.50 and £400 per game, and the fixed jackpot players can plunder from this slot’s paytable is 10,000 times your linebet for five Juicy Booty Wilds on a payline. The Wild does its usual swashbuckling substituting too, exerting its influence to pressgang unexpected wins out of the paytable over all but the Bonus and Free Spins Scatter symbols on the reels.

The presence of Juicy Booty’s captain – a buccaneer ring-tailed lemur – by the five reels is not just for show on this slot either, for he can randomly leap onto action to squeeze more juice from fruit-symbol wins.

This is the Fruit Slice feature, and allows the captain to slice random selections of visible fruit on the reels with his cutlass, to turn them into multiple instances. This extends the payouts possible for the fruit symbols, with the maximum potential of fifteen instances on a payline triggering some very big wins indeed.

The furry freebooters on this slot also have a Cannon Free Spins feature to boost your bounty too. Three or more instances of the Gunpowder Barrels in view on the basegame is the trigger for this feature, and a player pick of the visible barrels detonates the number of free spins awarded.

Three Barrels can shoot you into 5-10 free spins, four Barrels have 10-20 free spins in store, whilst the maximum payload of five Barrels will propel you into a round of 20-25 free games. Within the free games the reels are loaded purely with fruit, but a new feature symbol – a crate – is blown up by the captain’s cannon whenever it lands in view to reveal up to three matching fruit symbols to aid your mission to win big.

The final bonus treat in store on the good ship Juicy Booty is its Fruit Shoot Bonus. Triggered by three Pistol Scatters on the basegame, this is a second-screen bonus game where flying fruit are used for target practice by the captain.

Up to ten shots are awarded and any fruit you burst with shots on target reveal cash prizes or, more interestingly, golden keys. These keys not only award an extra shot in this game, but can also unlock this slot’s progressive jackpot – collect three during this feature and the ultimate treasure of the progressive is yours!

Playtech have done an excellent job with Juicy Booty, and if you’re looking for an entertaining progressive jackpot slot then we highly recommend joining the crew of players already squeezing the pips from this fruity little number.