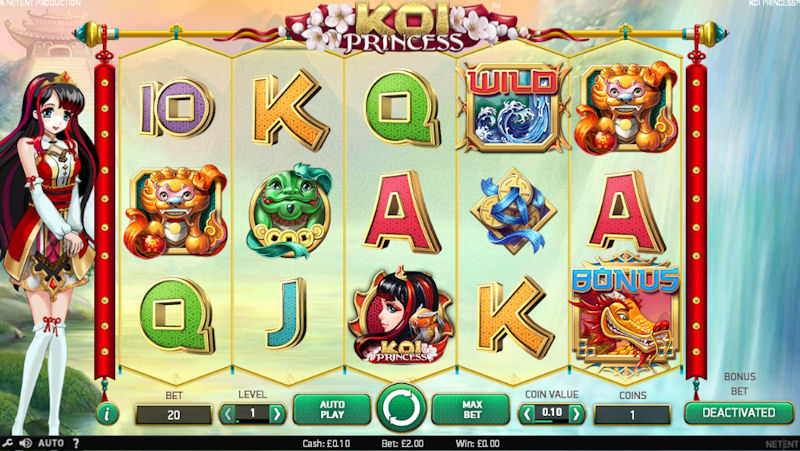 In recent years, NetEnt has shown an uncanny knack for developing online slots that absolutely dominate the lists of most popular slots with players at the best online casinos. Its Starburst slot pretty much swept all before it, however Koi Princess has shown herself to be a highly prized catch too, so what has this young lady got that keeps hooking players in?

First impressions do count, and Koi Princess will always get a second look for its very fine presentation. With an oriental theme and Japanese ‘anime’ style graphics, this is a stylish slot that is very easy on the eye, and makes every spin of its five reels a pleasure to watch.

Enhancing such simple pleasures is the chance of landing wins on this slot’s twenty-five paylines, and Koi Princess has a few surprises up her silk kimono sleeves beyond the Wild symbol that enhances chances of basegame pays with its power to substitute for other symbols.

Lurking in the calm waters of the lake below the Princess’s five reels are three frisky Koi carp (making the Koi part of the title suddenly make sense, although we did find the animated Princess beside the reels rather ‘coy’ too as she gently responded to our tender play) that can randomly leap from the water begging the Princess to ‘pick me’.

Deputising for the Princess you select a fish you fancy the look of to reveal one of four possible features – 5-Hit, Wild Random, Wild Reels or Bonus Activation.

Each of these awards a single free spin with either (respectively) a guaranteed five-symbol win result, between four and nine locked Wilds in view on the reels, between two or five whole reels locked as full stacks of three wilds, or a guaranteed activation of one of Koi Princess’s four bonus games! Yes, you did read that right – Koi Princess also lavishes four further bonus games on its players.

The Koi Princess bonus games can be triggered as mentioned above or through three instances of the Bonus Scatter spinning into view on the basegame. Of the four possible features two take the form of free spin bonuses – one with Random Wilds in play, the other with Wild Reels – one is an instant Coin Win and the last is a wheel-of-fortune style Bonus Wheel Feature.

Such a rich feature set increases the desire to experience them all, and while patient play with luck on your side can realise that ambition, Koi Princess also gives players the option to add a Bonus Bet to each spin to help here too. This does double your stake, but also increases your chance of triggering this slot’s random and bonus features.

The Koi Princess has a wonderfully stocked pool of features to fish for from its reels, and just a short session in the company of her Royal Fishness soon makes clear why she attracts so many suitors. If you’ve never given this slot a spin, we can heartily recommend you dive in sometime soon and immerse yourself in its winning ways.