Kong The 8th Wonder Of The World Slot

Kong The 8th Wonder Of The World Slot Review 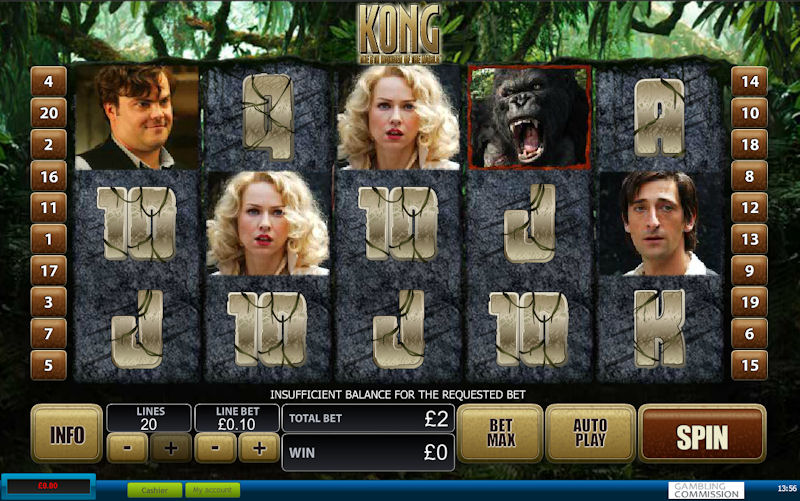 Before we even consider the actual online slot adventure promised here, we have to award Kong The 8th Wonder Of The World Slot an accolade for the insanely long title it sports!

This unwieldy name makes more sense once you appreciate that this video slot is a spin-off from Peter Jackson’s 2005 remake of King Kong, and that our large simian friend is advertised as “The Eighth Wonder of the World” when he is put on display in captivity for the general public’s delectation. So does this Kong slot deliver the same spills and thrills its filmic forbear does?

Naturally enough for a specific film-themed slot Kong The 8th Wonder of the World makes plentiful use of stills and short video clips of characters from the 2005 film to add some jungle juice to its basegame of five reels and twenty paylines.

What increases any player’s curiosity to explore these reels is that this Kong slot has two modes to its basegame and linked bonus features – Jungle Mode and Big City mode to reflect the two habitats our hairy hero finds himself in.

For all this seeming complexity of two modes, the actually gameplay in both basegames is identical with the same paytable in effect, merely different symbols and supporting graphics reinforcing the change of scene.

Both modes also feature a bonus free spins feature where three or more of the Kong Scatter symbol are in view, but these features are configured slightly differently with freezing Wild symbols lurking in the Jungle game, and expanding Wilds snatching wins from the freespins in the City.

Also unique to each venue for Kong’s antics is a second-screen bonus feature, the Skull Island Bonus and City Tower Bonus mentioned earlier. These are both simply on-screen picks of options framed around the game’s theme, each pick accumulating a final bonus reward which is pocketed at the end of the game ahead of the player being returned to the basegame of the opposite environment to that they were last in.

With the Kong film now over ten years old, it does make Kong The 8th Wonder of the World Slot seem a bit stale in some respects, as the movie wasn’t quite the classic like Gladiator that makes the Gladiator Slot seem less “out-of-date”.

Its two ‘modes’ also feel a bit ‘so what?’ in our opinion as the differences are mostly cosmetic and not especially imaginative interpretations of the King Kong story.

Despite these criticisms Kong The 8th Wonder of the World does deliver all the classic online slots features the majority of players love, so we doubt monkeying about on these reels will induce a Kong-sized fit of rage in you and, more likely its decent paytable and perfectly serviceable bonus features will peel some decent wins out of an exploration.

Today, Playtech’s Kong is not exactly the 8th Wonder of the online slot world, but there’s still plenty to love about this big old Gorilla.

Click ‘Play Slot’ for the best Kong The 8th Wonder Of The World Slot online casino.

Play Kong The 8th Wonder Of The World Slot