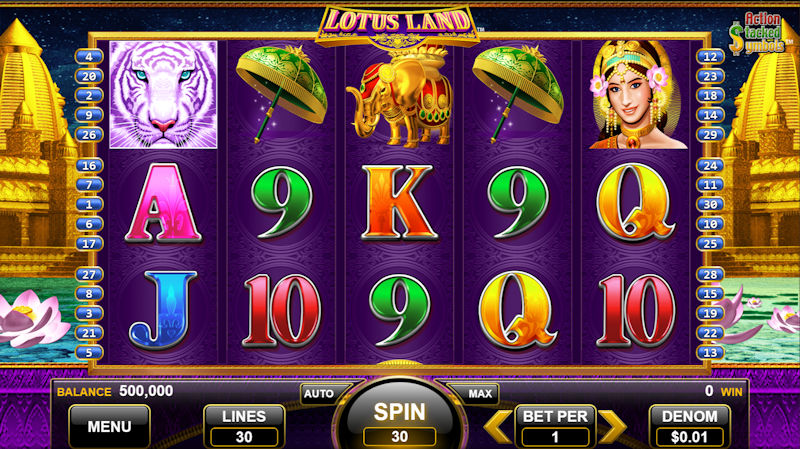 Konami has long been associated with video gaming, and players in land-based casinos may well have enjoyed the video slots it’s authored over the years amongst the ranks of cabinets. Surprisingly it’s been rather slow to break through in the online casino market, but now Lotus Land is one of its titles that you may find at some of the best online operators.

Lotus Land is a recreation of one of Konami’s popular real-world video slots, and that heritage is clear from its presentation. It’s an Asian-themed slot (as you may well have guessed from its title), with a familiar base game format of five-reels and thirty paylines. The symbol set calls on six Royals (9 to A) for lower pays, whilst five symbols themed with Asian-influenced icons take you into the higher realms of Lotus Land’s paytable.

A Wild in the form of a jewel-like blue orb can substitute for any of those symbols to assists a win, with that transformational power only excluded from this game’s Scatter symbol, the Lotus Flower itself. That exclusion is for the common reason with casino slots – the Scatter is the symbol that can trigger a bonus feature, in this case a prize of free spins.

Getting into the detail of that free spins feature, three of more Scatters in view is the trigger event, awarding eight, twelve or twenty free games depending on how many Scatters are present on that triggering spin. Scatters also remain on the reels during the free spins, so retriggering the feature during free spins is also possible without limit.

Adding a little extra fragrant fun to earning these free spins is the blossoming of the Wild into a Multiplier Wild during this bonus. That multiplier value can be between x2 and x5 depending on which of the middle three reels the Wild appears, and if more than one contributes to a winning combination they act together to further boost that pay. For example a x2 and x5 working together would result in a pay ten times the standard paytable value!

Lotus Land definitely falls into the category of online slot that has maximum appeal for players seeking the look and feel of playing a real-world Vegas slot. It’s a very simple game, with bonus features and styling that isn’t going to stir much surprise however there are plenty of players for whom that’s just the ticket. The simple pleasures of Lotus Land should not be underestimated. Like the Asian lily it’s named after, there is a pleasing purity about these reels that may well reward meditative play.