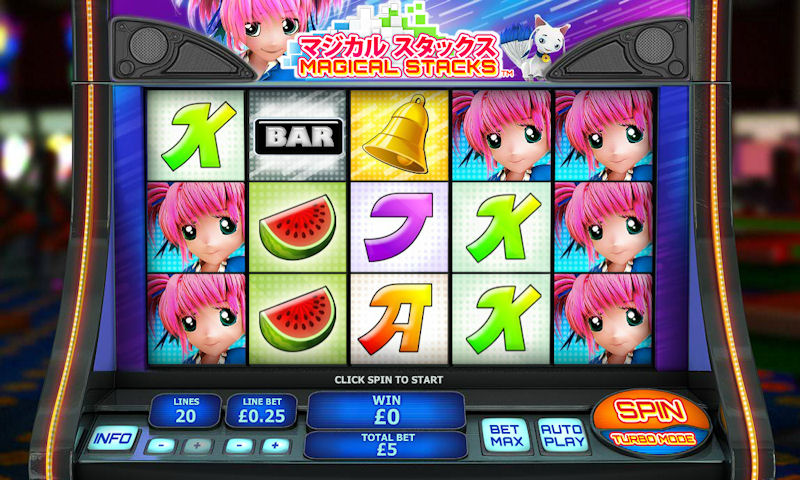 Playtech have a number of Far Eastern themed slot games in its catalogue, but they tend to look to China for their inspiration. Magical Stacks looks further east for its muse this time, with Japanese culture the obvious influence for this arcade styled online slot.

Rather than mining traditional symbols of Japanese life, Magical Stacks style is based on Japan’s comic-book anime look and kawaii, or ‘cute’, fashion.

The overall presentation of Magical Stacks mimics a real-world video slot on a gaming floor, which adds a funky vibe to the five-reel, twenty-payline basegame it offers. All symbols have the cool, cute, comic-book style that’s big in Japan, and the soundtrack has that breezy J-pop vibe to complete the authentic feel.

As has become a common feature with online video slots, three or more Scatters in view on the basegame is the trigger for a free spins bonus, here titled the ‘Super Magical Free Games’. Ten free spins is the initial reward, with retriggers possible, but the Super Magical bit is twofold.

First, more stacks of Mystery Symbols are loaded onto the five reels, and secondly a Dynamic Multiplier feature is activated. This multiplier is initially set at random between x2 and x5, but whenever a Gold Coin symbol appears on the fifth reel it steps up one value, and if no Gold Coin is seen it steps down one value. T

he maximum and minimum values for the multiplier are x5 and x2 respectively, so you can at least be sure any wins will be doubled and keep your fingers crossed that many are quintupled for really big wins.

Magical Stacks should really appeal to players who already love modern Japanese culture, but we think it should also hit the spot for players who enjoy online slots that recreate the look and feel of playing a real-world arcade game.

The game does that trick of transporting you to a gaming floor in a (Japanese) casino and there’s undoubtedly something rather engaging about the buzz of that experience. Magical Stacks is a relatively simple online slot, but the few little twists to its special symbols and free spins bonus feature work a fair bit of magic during play.

You may never have actively sought out a Japanese-themed slot before, but Magical Stacks slot is well worth taking for a spin as, even if the kawaii style isn’t your thing, the underlying game is very enjoyable to play.