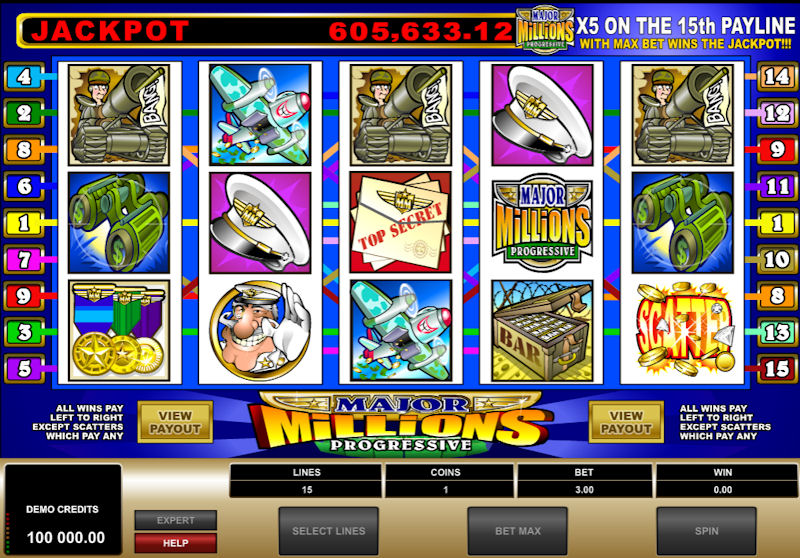 One of the major advantages the Internet brought to slot gaming is that the potential to link huge clusters of a single game virtually and easily through such a vast network meant massive potential for progressive jackpots.

The scale of players feeding a progressive jackpot made possible by the explosion in online casino gaming means popular machines can quickly build phenomenal jackpots and offer very high base jackpots from which that progression starts.

One slot that was an early star of the online progressive jackpot scene was Microgaming’s Major Millions, and it’s a testament to its player appeal that it still is to be found at many of the best online casinos.

As a veteran online progressive jackpot slot it has to be said Major Millions is beginning to show its age a little. Its presentation is pretty simple when compared to the newest slots on the market today, and it has the retro feel of a Vegas slot with a simple basegame of five reels and fifteen paylines.

The titular character of Major Millions (a rather dandy looking military man, who strangely reminds us of Bruce Forsyth) is this online slot’s Wild Symbol, which has the power not only to substitute for all other symbols except the Scatter to build wins, but also to triple the payout of those events.

He also has a pivotal role in capturing this slot’s progressive jackpot, of which more shortly. The Scatter simply offers another way to win on Major Millions, with the traditional power to pay when three or more are simply in view rather than needing to combine on an active payline.

The Major’s age also shows when it comes to bonus games too, because there aren’t any. No free spins . . . no wheels-of-fortune . . . nothing! Yet, in spite of this apparent weakness, Major Millions still commands a vast army of loyal players and that power almost certainly lies with the promise of his progressive jackpot.

Starting its campaign from a very impressive baseline of £250,000, over the years Major Millions has proven to be a progressive slot that builds very commanding warchests by the time they’re won, and has made several millionaires in its time. To win that highest award you’ll need to line up five instances of the Wild Major Millions himself and exclusively on this online slot’s fifteenth payline.

That last requirement also means it’s important to ensure you’re playing all the paylines on every spin if you’re hoping the land the ‘big one’, and playing any less than the Max Bet kind of defeats the main reason to get in a spin with the Major.

To be honest, we would like to see Microgaming give Major Millions a bit of a makeover, however this slot’s enduring popularity probably indicates he’s still highly respected by plenty of players.

Newer progressive jackpot games like NetEnt’s Mega Fortune offer a bigger thrill in our opinion, but it seems there’s life in the old Major yet, and if you’re after a super simple slot where playing for the progressive jackpot is your primary target, then he’s your man.