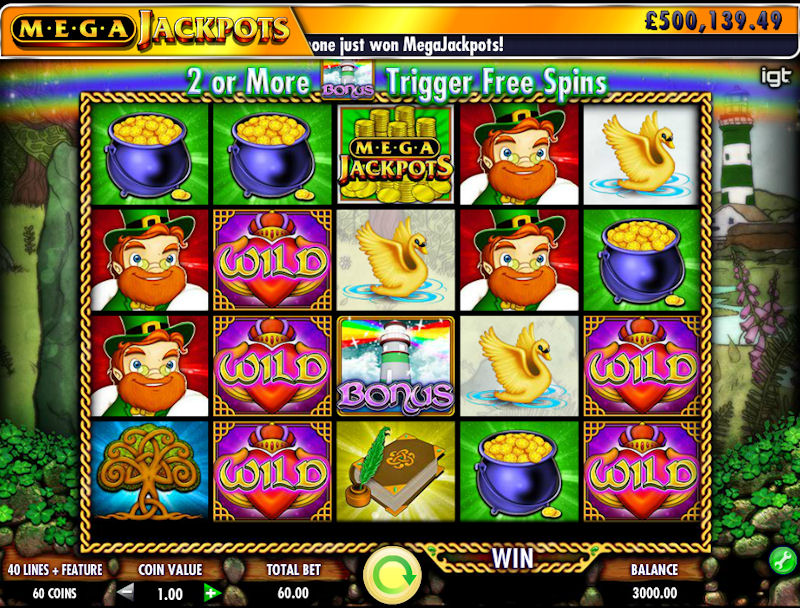 Slot players who’ve been around the online casino scene for a little while should instantly be aroused by the MegaJackpots prefix to this IGT slot’s full title.

For the less experienced, the MegaJackpots brand signifies this is a part of a huge network of online slots that feed a single progressive jackpot prize – MegaJackpots Isle o’ Plenty feeds the same massive pool of prize money as the MegaJackpots versions of Cleopatra slot and Siberian Storm, so its headline prize gets very big, very quickly!

Beyond the lure of the huge progressive jackpot this online slot can land, what else does this Isle o’ Plenty offer its visitors? If its title hasn’t already given the game away, this online slot embraces a whimsical Irish-luck theme that’s become a fixture (or cliché depending on your viewpoint) of slot culture.

Five reels and forty paylines make up Isle o’ Plenty’s basegame, with the ubiquitous Leprechaun fulfilling the role of the top-paying symbol on the paytable.

The Wild Rush feature adds a little extra ‘plenty’ to the Isle, with this slot’s Wild symbol having the power to spawn more Wilds down any reel it appears on, helpfully increasing the chance its power of substitution will magic a win from an active payline.

Also within the basegame is the Bonus Scatter symbol, found exclusively on its third reel, which guides players safely to the harbour of this online slot’s free spins bonus game. Two in view gifts six free spins, three earns twelve spins, and the maximum of four in view puts twenty-four free spins on the clock.

Entering the free spins bonus game also sprinkles a little ‘Leprechaun magic’ on proceedings with each spin being guaranteed a minimum of one Wild in play on the top row of the reels and possibly a MegaJackpots symbol (of which more shortly) to increase the power to pull plenty from the paytable.

Free spins are also re-triggerable in this bonus game, with a maximum of 240 possible if luck keeps landing the Scatters in view on reel three.

Returning to the progressive potential of MegaJackpots Isle o’ Plenty, players have two ways to win should the luck o’ this Irish themed slot be with them. First, the MegaJackpots symbol is the elusive quarry sought on this online slot’s centre reel – like cloverleaves, four is the magical number here, so seeing the centre reel filled with nothing but MegaJackpot symbols is the heart-stopping moment you know you’ve bagged the ‘big one’.

However the MegaJackpots progressive also has a random ‘Second Chance’ trigger, which can simply award a lucky player the top prize after any game, whether that spin generates a win of any kind or not! It’s worth noting here that the size of your stake affects the odds of this Second Chance event, so higher-staking players have more chance of feeling the warm glow of its charity.

MegaJackpots Isle o’ Plenty isn’t an especially innovative online slot, however the appeal of its millionaire-making progressive jackpot is undoubtedly a strong incentive to set course for a little visit to its richly rewarding reels.