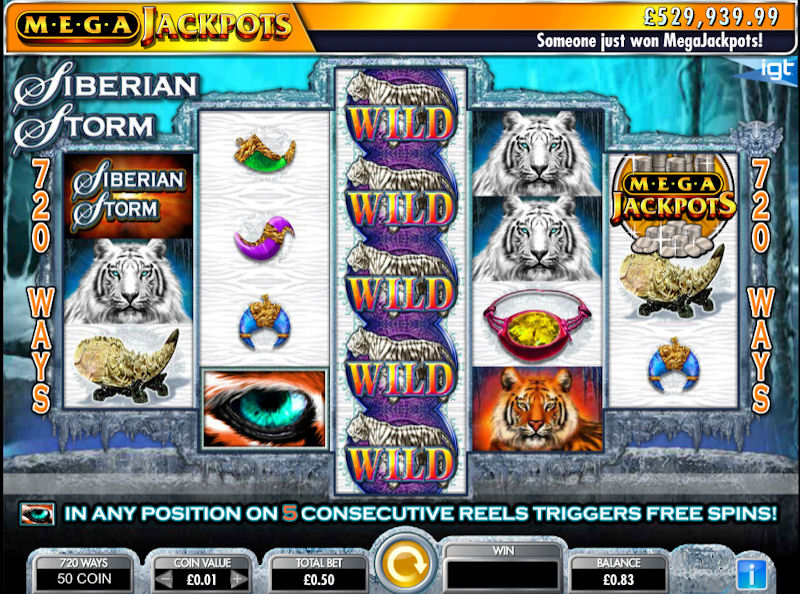 A casino slot that kicked up a real storm in land-based casinos on its launch in 2010 was IGT’s intriguing Siberian Storm.

Thankfully you won’t have to make an arduous trek to your nearest bricks ’n’ mortar club to hunt this beast of a machine down as it’s now also stormed into the best online casinos. So what makes this wintry online slot so cool?

First, Siberian Storm Mega Jackpot is from the first moment you set eyes on it quite a different animal to your traditional video slot, and its promise of 720 Ways to Win certainly catches the attention.

Rather than the traditional five-reel, multi-payline configuration of the majority of popular online slots, Siberian Storm dispenses entirely with the concept of paylines.

In effect all the symbols on this themed slots five reels are Scatters and so only have to be in view to be considered in play. In addition, and also diverging from traditional slot rules, wins can also pay from left to right and right to left.

This means wins are generated by three of more matching symbols being spun into view on adjacent reels, but Siberian Storm has one further party trick to perk up its paytable – if you also find another instance of a winning combinations symbol in one of the columns (i.e. two or more instances are in view on the same reel) the standard win is multiplied again.

All this fascinating reimagining of the usual slot mechanics doesn’t lost sight of some of players’ favourite features either, so Siberian Storm includes a Wild symbol that can substitute for all other symbols (except the Jackpot symbol) and a freespins bonus game that allows retriggers to deliver the potential of banking up to 240 free spins.

With its innovative basegame alone Siberian Storm makes for a superbly compelling themed slot, but adding on its Mega Jackpot makes this game not just cool but ice cold!

A feature seen on other IGT hit slots, Mega Jackpots is a progressive prize meatier than a Siberian Tiger’s lunch, which is yours to snare if five of the Mega Jackpot symbols end up in view on the Siberian Storm reels during any spin including any bonus free spins awarded.

Attractive as this is, that’s not the only route to capturing this rare and precious reward, since Mega Jackpots includes a behind-the-scenes ‘second chance’ feature that’s ready to pounce after any spin.

Interestingly, this random second chance trigger has its odds linked proportionally to a players stake so it’s worth noting that increasing your stake will increase your chances of winning the progressive by the ‘second chance’ method.

For any player seeking something a little bit different from the norm, Siberian Storm Mega Jackpot is one online slot you really owe it to yourself to check out.

A decent range of stake options lets you enjoy the action with even the leanest of budgets, and its 720 Ways to Win coupled with its hefty progressive jackpot delivers a very tempting slot game indeed. Like the Siberian Tiger that roars from its reels, this is a rare and beautiful beast.