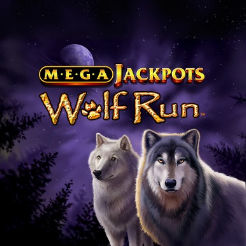 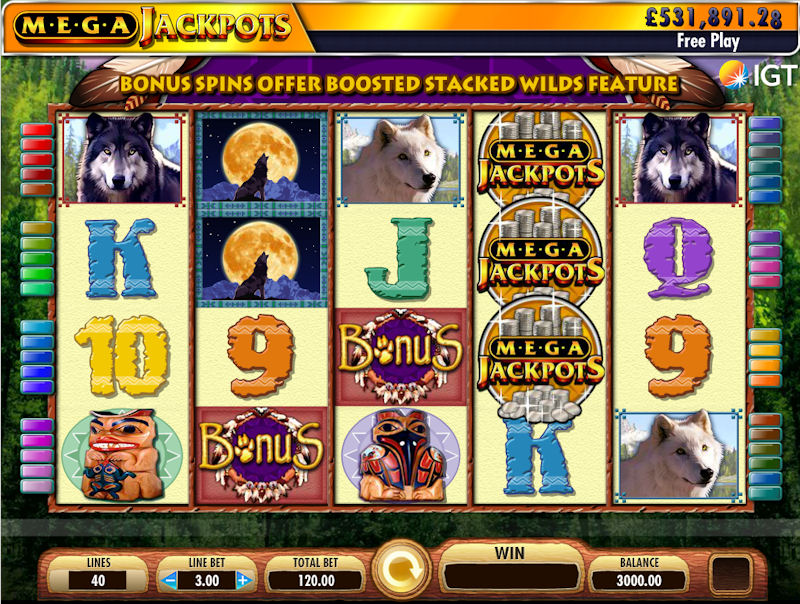 For slot jockeys that have been around the scene for some time, IGT’s Wolf Run slot is something of a legend. Originally a real-world video slot found on the gaming floors of many land-based casinos, its popularity with players in those environments gave it a head start when it made the transition to online casinos in this century.

Still holding its own with many newer titles at the best online casinos, IGT have refreshed this old-timer’s appeal with a MegaJackpots makeover to add a progressive jackpot to its existing ways to win.

Focusing on the foundations of Wolf Run MegaJackpots slot, we find the classic five reel, forty-payline format of its parent game with all the familiar lupine and Native American symbols on the paytable. A howling wolf framed by the moon is (and always was) Wolf Run’s Wild symbol and appears in stacks, an innovation that was quite the thing when Wolf Run first debuted in land-based casinos last century.

With the MegaJackpots version this is augmented by the equally Wild and stacked MegaJackpots symbol itself. These two Wilds can substitute for all other symbols except each other and the Bonus Scatter. This Bonus Scatter is only found on the middle three reels, but three in view will award five free spins, and remain in play during those bonus game allowing potential retriggers at any time.

So why does this Wolf Run slot have two Wilds that do the same thing? Well, the MegaJackpots symbol does have one further role to play, which you can probably guess at from its name – it’s the key (although not the sole key) to this slot’s progressive jackpot.

Since these Wilds are stacked it’s possible for a spin to result in every single visible symbol being a MegaJackpot Wild, and that means ‘hello progressive jackpot’! And what a jackpot. It starts at £500,000 and escalates very quickly indeed. Hitting a million isn’t unknown, so we’re talking a payout that will make you salivate like a wolf seeing an overweight bison with a dickey heart and nervous disposition.

Clearly hunting down MegaJackpot Wilds on this slot is a thrilling way to land its progressive jackpot but, as hinted at earlier, there’s another way to win the MegaJackpots’ motherload. The Second Chance feature is simply a random trigger to payout the progressive jackpot to a lucky player at any time, regardless of what they’ve staked or what result their reels have produced. This obviously doesn’t build tension like seeing the reels gradually fill with MJ Wilds to trigger the win, but we doubt any player is going to complain about how they won the progressive this slot feeds!

In truth we would have liked to have seen IGT refresh Wolf Run a little more deeply than simply adding the MegaJackpots feature to the earlier version. Don’t get us wrong, Wolf Run plays and pays like a really compelling casino slot should.

It just looks a bit ‘dated’ now in our opinion and a makeover to add more modern production values wouldn’t do it in any harm. That said, whilst Wolf Run is looking rather long in the tooth, with its MegaJackpots version it still has plenty of bite when it comes to delivering big wins.